As COVID-19 shutters salons, Canadians take hair into their own hands 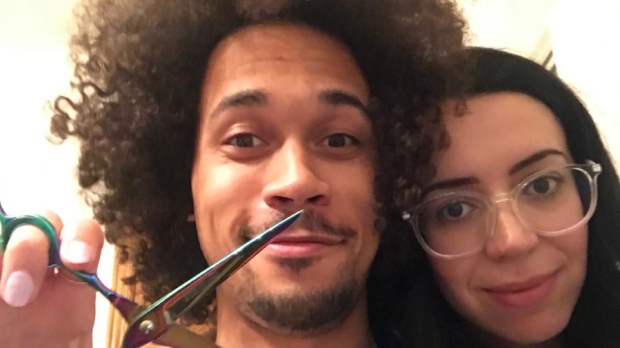 Marlene and Tyrell Bain pose in this undated handout photo. Stylists are bracing for a tangle of misbegotten hairdos as the COVID-19 pandemic has shuttered salons, prompting Canadians to reveal their true colours or risk primping their own tresses. Marlene Bain said her husband, Tyrell, is known for his signature afro, but when his locks started getting caught in his glasses, they both knew it was time for a cut. THE CANADIAN PRESS/HO - Marlene and Tyrell Bain

Stylists are bracing for a tangle of misbegotten hairdos as the COVID-19 pandemic has shuttered salons, prompting Canadians to reveal their true colours or risk primping their own tresses.

P.E.I. Minister of Economic Growth, Tourism and Culture Matthew MacKay warned constituents earlier this week that they'd soon see his jet-black hair turn grey, and not just because of the stresses of coping with the crisis.

“I will start off by confessing that I dye my hair. If I didn't, I would be grey,” MacKay wrote in a Facebook post Monday.

“I figured I might as well tell everyone now because in two weeks you will find out anyway now that hair salons are closed. At 38, I'm not ready to let it go natural.”

Kelly McCarthy, a hair colourist in Mississauga, Ont., said she's been fielding texts from clients who are similarly concerned that their not-so-golden locks will be exposed.

McCarthy said some have even asked her to pop by their homes for a touch-up, or share the formula she uses so they can try dyeing it themselves.

In the interest of public health and hair health, McCarthy has turned down such requests, warning that in the long run, it will cost them a lot more to undo the damage of box dye.

Her own magenta-hued hair has faded to a rose gold, and with all the beauty supply stores closed, she only has enough product on hand to revamp her colour the day before she gets back to work.

McCarthy is all for using personal grooming as a palette to express one's creativity.

But while we're all stuck inside with no one to impress, she encourages people to return to their roots and embrace the natural ombre.

Besides, she adds, we can all get “post-pandemic makeovers” later.

“I want to go back to feeling our best, but I think this is also teaching us that we don't need to have that physical beauty to feel beautiful.”

Cassandra Balenzano, who runs Haircraft by Cass in Mississauga, Ont., said she's been offering tips on Instagram about how to turn self-isolation into a time to give hair a vacation from the stresses of heat styling and chemicals.

Depending on how long this wears on, Balenzano said she's considering posting tutorials on how to trim your fringe or clean up your partner's crew cut.

While she agrees that's it best to leave the scissors to the professionals, Balenzano said she's been in this business long enough to know that stylists don't get the final say, and she's hoping to minimize the number of messes she'll have to clean up later.

“If people want to do something, they're going to do it,” she said. “I'm trying to just make sure that everybody's educated, so they're not using kitchen scissors or the first dye they find (online).”

Hair can be emotional for many people, Balenzano noted.

While others may not be around to admire your coif, Balenzano said hair styling can be a form of self-care for some by giving them a sense of routine during tumultuous times.

Others may decide to shake up their look as their surroundings grow stale, she suggested.

That's certainly the case for Sarah Mayer, a 21-year-old in Penticton, B.C., who unveiled her latest do-it-yourself look of bleached hair and eyebrows to less-than-enthusiastic reviews.

“I think I look fine. My boyfriend and my sister are a little mad at me,” said Mayer. “But no one is going to see me for weeks, so it's OK.”

Mayer has even offered counsel to her friend, Noa Karmel of Calgary, who is considering styling her own curly, blonde mane for the first time.

She's been mulling over getting bangs for a while, but said the prospect of being cooped up in her house for months has emboldened her to experiment with her look.

Marlene Bain said her husband, Tyrell, is known for his signature afro, but when his locks started getting caught in his glasses, they both knew it was time for a cut.

She said she felt like Edward Scissorhands as she lopped off nearly three inches of Tyrell Bain's hair to the horror of his Instagram followers who were watching the cut unfold through his posts.

“Everyone was reacting like, 'No! Don't cut your 'fro off,”' Marlene Bain recalled. “It was definitely stressful.”

For his part, Tyrell Bain felt confident his “'fro” was in safe hands.

He said it can be difficult to find a barber who can style his type of hair. And while he still plans to go for professional cuts, the experience showed him he can trust his wife to maintain his mane between visits.

“I figured now is a great time to let it grow out. Let's see if I can actually do this,” added Marlene Bain. “If it turns out to not be a good haircut, we have a couple more weeks in quarantine.”

This report by The Canadian Press was first published March 25, 2020.