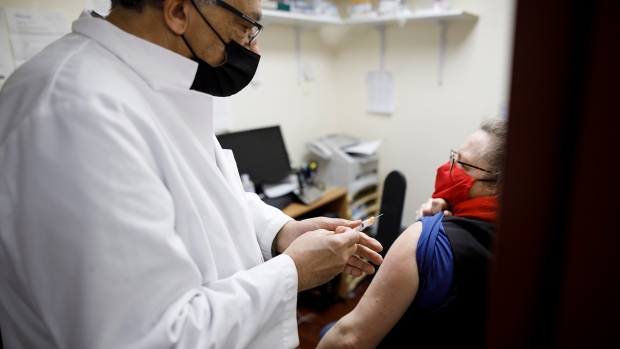 Pharmacist Abraam Rafael administers a COVID-19 vaccine to Maureen Doyle at his pharmacy in Toronto, Sunday, March 14, 2021 as Ontario starts administering the AstraZeneca vaccine for COVID-19 to residents aged 60-64. THE CANADIAN PRESS/Cole Burston

When Gwenny Farrell booked her second dose of the Oxford-AstraZeneca COVID-19 vaccine on the first day it became available, she said she believed she was doing the right thing.

The resident of White Rock, B.C., said she has tried to follow every health protocol and recommendation strictly, so her confidence has been shaken by a new recommendation from the National Advisory Committee on Immunization on mixing the vaccines.

On June 1, NACI had said AstraZeneca recipients “could” get Pfizer-BioNTech or Moderna for their second shot if they wanted, but on Thursday it went further to say an mRNA vaccine was the “preferred” choice.

“I'm frustrated because now, after being told for months that the best vaccine is the first one that's in your arm, I'm being told I may have made a mistake,” Farrell, 55, said.

The new recommendation is drawing mixed reaction from those who've already received two jabs of AstraZeneca. Farrell is not alone in her disappointment, while others say they remain happy with their choice because they know it still means they are well protected against COVID-19.

The committee's guidance is based on the growing supply of mRNA vaccines, growing evidence that a second dose of an mRNA vaccine produces a stronger immune response, and because of the low but serious risk of vaccine-induced blood clots associated with AstraZeneca.

The committee also updated its previous recommendation that people at high risk of exposure to, or serious illness from, COVID-19, could opt to get AstraZeneca rather than waiting for Pfizer or Moderna. Now NACI says everyone should always get the mRNA vaccines first, unless they are allergic to them.

However, officials in Quebec and British Columbia didn't move to follow NACI's advice, instead saying residents can still make a personal choice for either a mixed schedule or two doses of AstraZeneca.

“The very real world evidence shows us we have good protection across the board with both vaccines in our community,” B.C. provincial health officer Dr. Bonnie Henry said.

There are no further shipments of AstraZeneca scheduled, but there are still about half a million doses of it in the provinces.

Toronto resident Sophie Nadeau said she remains grateful that she got her second AstraZeneca jab on Tuesday.

Nadeau said she made the best decision she could with the information available at the time. As a single mother who hasn't been able to see her parents in a long time, it was important to get the first vaccine that was available.

As a public relations professional, Nadeau said she has a lot of empathy for those responsible for communicating what she understands to be naturally evolving recommendations as new evidence becomes available.

“There are no perfect choices when it comes to COVID-19,” she said, adding the pandemic has made everyone develop risk assessment skills.

“I really do feel like for the last year and a half, every single thing has become an assessment of risk: from masks, to letting my kids out, to seeing my parents or choosing not to in this case. By this point, I've kind of become emotionally prepared for the story to change.”

Mike Farnworth, British Columbia's minister of public safety, said he got his second AstraZeneca dose last week and would do the same if it was available this week.

He said his message to other British Columbians who have received two doses is the same: “Don't worry, you're fully vaccinated.”

Others aren't so sure. Michael Slavitch, 54, made two separate appointments for his second dose because of mixed advice.

He now plans to cancel his AstraZeneca appointment Monday and keep his appointment for an mRNA shot.

Slavitch said he's particularly concerned about whether his AstraZeneca vaccine, or mixing and matching, will be accepted by other countries as international travel opens up.

“I'm confused about what to do,” he said. “Our government is responsible for cleaning up this mess.”