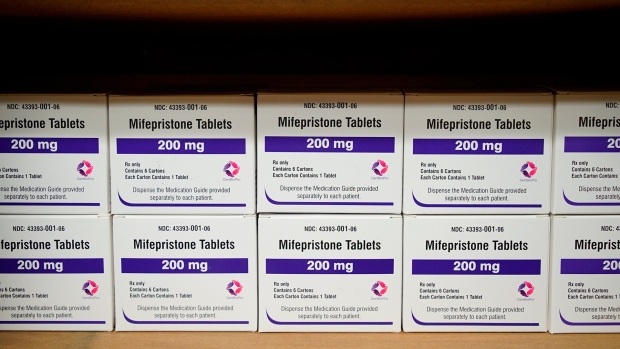 Boxes of the drug mifepristone line a shelf at the West Alabama Women's Center in Tuscaloosa, Ala., on Wednesday, March 16, 2022. The drug is one of two used together in "medication abortions." According to Planned Parenthood, mifepristone blocks progesterone, stopping a pregnancy from progressing. (AP Photo/Allen G. Breed)

Canadian advocates are highlighting abortion pills as an underused option in this country as uncertainty looms over the procedure's future in the United States, putting a spotlight on its accessibility.

Any doctor who can prescribe medications is able to facilitate what's known as a “medical” or “medication” abortion, which can be done safely at home rather than requiring a trip to a clinic or hospital, said Autumn Reinhardt-Simpson, founder of the Alberta Abortion Access Network.

“Abortion can be managed at home with these pills very safely,” Reinhardt-Simpson said. “The lack of understanding that (doctors and pharmacists) even have the ability to prescribe or dispense these things, is really holding back a lot of progress in terms of abortion access.”

Some abortion clinics and doctors' offices offer “no-touch” abortions up to 10 weeks, a service that's become more common over the course of the COVID-19 pandemic.

There's renewed scrutiny on the issue of access to abortion after a draft document was leaked to Politico suggesting the Supreme Court of the United States was poised to overturn Roe v. Wade, the landmark 1973 case that legalized abortion nationwide.

In Canada, the right to abortion is decriminalized but the procedure is not always easily accessiblefor those who cannot make arrangements to visit a clinic - something advocates said the abortion pill can help with.

“There are so many barriers - physical, mental, emotional- to access an abortion here in Canada,” Reinhardt-Simpson said. “One is that the country is just so big. And you have these geographically far-flung, large cities where most of the clinics are.”

The abortion pill, mifepristone, became available in Canada at the beginning of 2017, but various restrictions, such as a requirement that only specially trained physicians, and not pharmacists, prescribe the drug and watch the patient take the pill, were in place until that November.

A study from the University of British Columbia published this January in the New England Journal of Medicine found that in the four years before the drug became available, medication abortions accounted for 2.2 per cent of the procedures in Ontario.

In the months when mifepristone was available but access was restricted, the number jumped to 8.3 per cent, the research found. After the restrictions were lifted, from Nov. 7, 2017, through March 15, 2020, the proportion climbed to 31.4 per cent.

The study examined “population-based administrative data” from Ontario on the use, safety and effectiveness of the pill.

Abortion rates in Canada have been declining, andthe UBC research found the decline continued after mifepristone became available, though it slowed somewhat.

The data does not include medical abortions following the onset of the COVID-19 pandemic, when more medical care went remote.

Joyce Arthur, executive director of the Abortion Rights Coalition of Canada, said that broader trend in medicine has also had an effect on abortion.

“Ironically, the pandemic has helped in terms of giving a boost to telemedicine abortion services, where people can get on a call with the doctor and get a prescription and then just go over to the local pharmacy to pick it up,” she said.

“There's still a lot of work to be done in terms of improving that access as well. But it's happening. And I think it's a work in progress, but it's certainly going to help a lot in terms of relieving the stress off of clinics and hospitals.”

Virtual care for medical abortions received a stamp of approval from the Society of Obstetricians and Gynecologists of Canada, which during the pandemic released a protocol document guiding doctors through prescribing the two-step medication and following up via telemedicine.

If it's been less than 70 days since the patient's last menstrual period, the entire process can be done through virtual care. If it's been more than 70 days or the patient doesn't remember when their last period was, or if there are risk factors for complications such as an ectopic pregnancy, then they need to be referred for an ultrasound.

The protocol also calls for three followup appointments, one week, four weeks and five weeks after the patient takes the two pills.

This report by The Canadian Press was first published May 5, 2022.