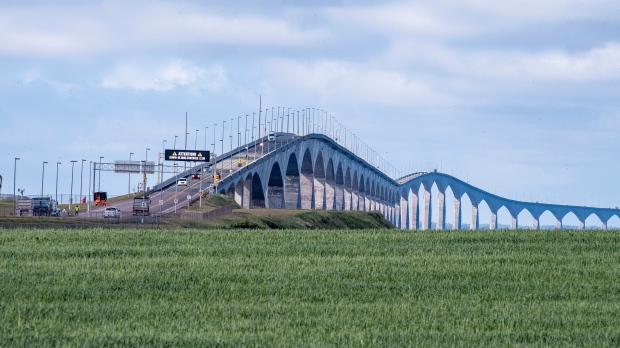 Motorists line up to cross the Confederation Bridge as the so-called tourism bubble for the Atlantic region begins, Friday July 3, 2020. Nearly two weeks after a loosened travel agreement between their provinces came into effect, Atlantic Canadian premiers are not rushing to set a date to welcome visitors from the rest of the country. THE CANADIAN PRESS/Brian McInnis

TORONTO - COVID-19's second wave tightened its grip on the Prairies on Monday, while two eastern provinces pulled out of the Atlantic bubble in an effort to rein in the virus.

It marked the first time Manitoba's daily count has surpassed 500, though the province has led all others in recent weeks in terms of infection rates.

Still, chief provincial public health officer Dr. Brent Roussin said there is room for optimism, noting the growth in daily case counts has slowed. The change came after a series of increasingly tight restrictions were imposed on public gatherings and store openings.

“But for the restrictions, we could have been seeing much more numbers, possibly,” Roussin said.

Alberta appeared poised to enact more restrictions amid rising cases, but Premier Jason Kenney has said the province will continue to take a more “holistic” approach to the pandemic. He suggested over the weekend new measures would likely be implemented, but rejected the idea of broad closures.

Kenney was set to meet with his COVID-19 steering committee Monday and leave isolation after coming in contact with someone with the illness and then testing negative.

Alberta's daily case counts have more than doubled in recent weeks, and hit a record 1,584 on Sunday - more than any other province that day, despite having far fewer residents than Ontario or Quebec.

Saskatchewan's premier, Scott Moe, announced Monday he will self-isolate due to a possible exposure to COVID-19 that took place on Nov. 15. The province announced 235 new cases Monday and four new deaths.

In Eastern Canada, two provinces announced their temporary withdrawal from the Atlantic bubble on Monday in an effort to curb the spread of COVID-19.

Anyone travelling to Newfoundland and Labrador from the Atlantic region will have to self-isolate for 14 days starting Wednesday, just like visitors from other parts of the country.

Speaking in St. John's, N.L., Premier Andrew Furey said the decision was made in “an effort to avoid a full lockdown.”

Prince Edward Island is barring all non-essential travel to the province for two weeks, in what Premier Dennis King called a preventive move.

Newfoundland and Labrador and P.E.I., along with Nova Scotia and New Brunswick, were part of the so-called Atlantic bubble that allowed residents to travel freely within the four provinces' borders without isolating.

Newfoundland and Labrador reported two new cases Monday, and P.E.I. reported one. All of P.E.I.'s 69 cases since the pandemic began have been travel-related.

Stricter limits on social gatherings also took effect in the Halifax region and a neighbouring county on Monday.

Meanwhile, two major urban centres in Ontario where COVID-19 cases have been surging entered the lockdown stage of the province's pandemic protection plan on Monday, where they will remain for at least 28 days.

As a result, all non-essential retailers in Toronto and neighbouring Peel Region are reduced to curbside pickup only, and restaurants are limited to takeout and delivery orders. Personal services such as hair salons are also closed, but schools and child-care centres remain open.

Some noted the measures will disproportionately affect small businesses, while larger corporations will likely continue to thrive.

“The structure of the lockdowns in Toronto and Peel will likely have the largest impact on small business who are now forced to shut down, driving shoppers to big-box stores,” BMO analyst Benjamin Reitzes wrote in a morning note.

“This is where the real damage is going to be from this government decision.”

Asked why the province didn't try to level the playing field by preventing big-box stores from selling non-essential items like Manitoba did recently, Ontario Premier Doug Ford said it would be a “logistical nightmare” for business owners to cordon off areas of their stores and monitor shoppers to ensure they stick to essential purchases.

The mayors of several municipalities in the Toronto and Hamilton area urged any retailers who remain open not to hold “large in-person sales” on Black Friday, noting these would “inevitably produce crowd scenes which would only serve to undermine the fight against COVID-19 and negate the sacrifices being made by so many, including other businesses.”

Other areas of Ontario, which reported 1,589 new cases of COVID-19 and 19 new deaths on Monday, are also seeing tighter restrictions as they move to higher alert levels under the province's colour-coded plan.

Ford suggested things would get “back to normal” once COVID-19 vaccines are in circulation, announcing the former head of the Canadian Forces, retired general Rick Hillier, would lead the province's vaccine distribution.

“Once approved, once in mass production, these vaccines will finally bring an end to this pandemic. The vaccine is what will get life back to normal,” he said Monday.

Quebec, another province hit hard by the pandemic, reported 1,164 new cases of COVID-19 and 13 more deaths on Monday.

COVID-19 cases in Yukon jumped to 38, 14 more than just a week ago. Yukon increased restrictions last week as infection rates jumped in jurisdictions around it, requiring all but critical services workers to self-isolate for two weeks when they enter the territory.

“These developments are deeply concerning as they put countless Canadians at risk of life-threatening illness, cause serious disruptions to health services and present significant challenges for areas not adequately equipped to manage complex medical emergencies,” Tam said in a written statement.

An increasing number of people are also experiencing severe illness as a result of the novel coronavirus, with more being treated in intensive care units, she said.

“This situation is putting pressure on local health-care resources and forcing hospitals to make the difficult decision to cancel elective surgeries and procedures in several areas of the country,” Tam said.

This report by The Canadian Press was first published Nov. 23, 2020.