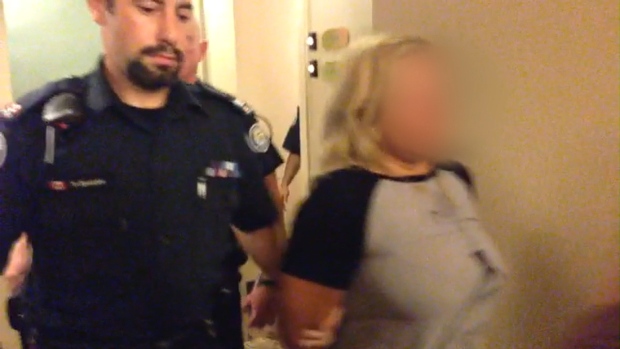 Police take an unidentified woman into custody after an abducted boy was located in a downtown Toronto hotel on Thursday.

Police say a nine-year-old American boy who was found ``safe and sound'' after he was allegedly abducted by his mother and uncle during a family reunion in southern Ontario will be reunited with his father.

The boy, who was the subject of an Amber Alert Thursday morning, was found in a downtown Toronto hotel nearly a day after he went missing in the Niagara Region.

He was with his mother, who was taken into custody, while the uncle was arrested in a separate location.

Police said late Thursday night that proceedings on abduction charges against the pair can't begin without the consent of the provincial Attorney General.

Police said the mother and uncle have been released from custody pending the outcome of the investigation.

Niagara Regional police spokesman Derek Watson says the boy and his father are U.S. citizens who live in Georgia and were in Niagara Falls for a family visit to Marineland.

Police are shown outside the Eaton Chelsea Hotel, where an abducted nine-year-old boy was located on Thursday morning.