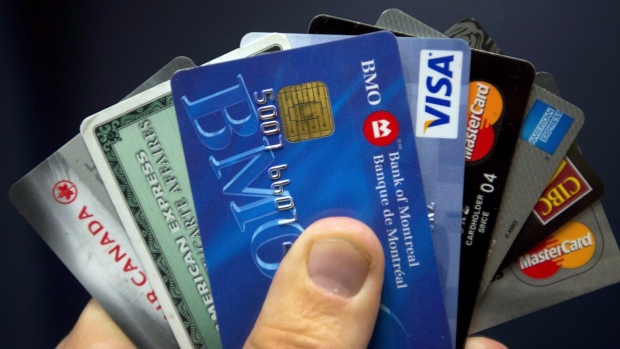 The amount of non-mortgage debt owed by Canadians is rising, boosted by new lending and higher spending linked to inflation, according to a new report by Equifax Canada.

The report out Tuesday by the credit rating agency said the average non-mortgage debt per consumer was $21,128 in the second quarter, up 2.4 per cent compared with a year earlier.

"Its impact on consumer credit is not just visible in day-to-day credit card spending, but also in other non-mortgage debt like auto loans and lines of credit, where balances are on the rise," Oakes said in a statement.

Equifax said credit card balances rose to the highest level since the fourth quarter of 2019 and the average credit limit on new cards is over $5,800, the highest it has been in the last seven years.

"High consumer demand for credit cards means a competitive marketplace for lenders. As a result, the credit limits being offered on new cards are much higher than we've seen in previous periods," Oakes added.

Overall, Equifax said total non-mortgage debt rose to $591.4 billion, up 5.2 per cent from a year ago, while total consumer debt rose to $2.32 trillion in the second quarter, up 8.2 per cent compared with the same quarter last year.

The report noted new mortgage volume fell by 16.4 per cent in the second quarter, compared with the same period last year, amid a slightly cooler housing market in recent months.

However, despite a cool-down in the housing market, the average loan amount for first-time homebuyers only dropped 0.5 per cent in the second quarter compared with the first quarter, with the average monthly payments increasing by 10 per cent.

"The cooling housing market in Canada should not be mistaken for increasing affordability," Oakes said.

"Affordability depends not just on home prices, but also on monthly payment obligations for a mortgage. Higher interest rates coupled with high inflation can really stretch a consumer’s monthly expenditure, while many could find it difficult to qualify for a mortgage."

The report said the average loan amount for new mortgages in Canada was over $367,000, with average loans for first-time homebuyers at over $430,000.

Equifax also said consumer insolvency rose to the highest levels since the start of the pandemic, mostly driven by an increase in consumer proposals.

The report comes as economists anticipate a supersized interest rate hike from the Bank of Canada on Wednesday, as the central bank works to combat inflation.

This report by The Canadian Press was first published Sept. 6, 2022.