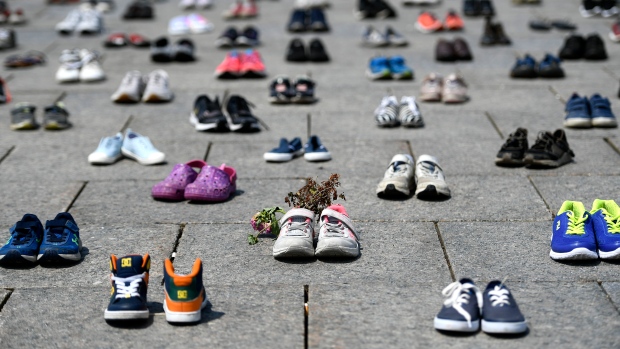 In this file photo, dried flowers rest inside a pair of child's running shoes at a memorial for the 215 children whose remains were found at the grounds of the former Kamloops Indian Residential School at Tk’emlups te Secwépemc First Nation in Kamloops, B.C., on Parliament Hill in Ottawa on Friday, June 4, 2021. THE CANADIAN PRESS/Justin Tang

WILLIAMS LAKE, B.C. - A First Nation in British Columbia says a preliminary geophysical investigation has identified 93 “reflections” that could indicate the number of children buried around the site of a former residential school.

Chief Willie Sellars of the Williams Lake First Nation says only excavation would confirm the presence of human remains and much more work is needed to make final determinations.

He says 14 of 470 hectares around the former St. Joseph's Mission Residential School have so far been examined as part of a process to discover what happened to children who didn't return home.

The investigation near Williams Lake comes after the use of ground-penetrating radar led to the discovery last year of what are believed to be 215 unmarked graves at a former residential school in Kamloops, B.C.