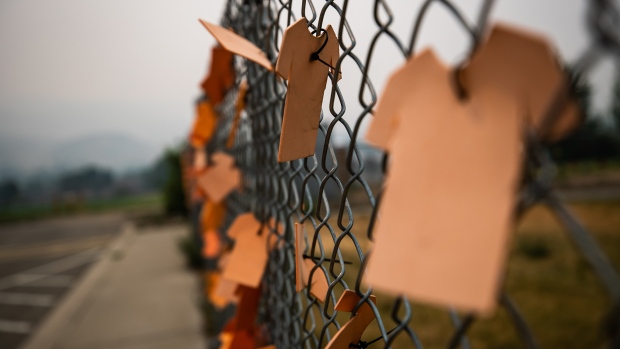 Cutouts of orange t-shirts are hung on a fence outside the former Kamloops Indian Residential School, in Kamloops, B.C., on Thursday, July 15, 2021. THE CANADIAN PRESS/Darryl Dyck

WILLIAMS LAKE, B.C. -- A First Nation in British Columbia is expected to release preliminary results today of a geophysical examination at the site of a former residential school.

Chief Willie Sellars of the Williams Lake First Nation has said the first phase of the investigation at the former St. Joseph's Mission Residential School has been challenging for its members and area First Nations.

He said in a written statement in November that the investigation has opened old wounds as people have recounted stories of abuse.

But he said the information has been helpful as part of the first phase of the investigation involving technical experts.

The investigation near Williams Lake comes after the use of ground-penetrating radar led to the discovery last year of what are believed to be hundreds of unmarked graves at a former residential school in Kamloops, B.C.

Following what was found in Kamloops, similar searches were done at former residential schools across the country.

Last week, the federal government announced it will transfer thousands more documents related to residential schools to the National Centre for Truth and Reconciliation in Winnipeg.

Crown-Indigenous Relations Minister Marc Miller said a new agreement with the centre outlines how and when the documents will be sent so the organization can make them available to residential school survivors.