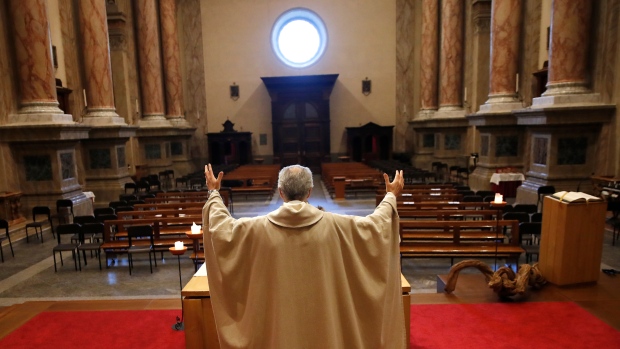 Don Angelo Riva celebrates a mass in an empty church after Italy's lockdown measure to prevent the spread of Covid-19, in Carenno, Italy, Thursday, April 2, 2020. The new coronavirus causes mild or moderate symptoms for most people, but for some, especially older adults and people with existing health problems, it can cause more severe illness or death. (AP Photo/Antonio Calanni)

Dr. Bonnie Henry said Thursday that many communities have already been considering how they can practise their faith during the COVID-19 crisis, and she will speak with faith leaders next week to share ideas.

The provincial health officer also announced six more deaths in British Columbia, where 31 people have now died and an additional 55 new cases of the virus have been recorded, for a total of 1,121 cases.

Of the 149 people in hospital, 68 were in intensive care.

“It's a challenging time for us. We're in that phase where we need to be incredibly careful about what we're doing,” Henry said, adding measures such as physical distancing are largely being followed and that is allowing the disease to be managed.

She urged people to continue “standing united” in following regulations to reduce the spread of COVID-19.

“We must do all that we can to protect our families and communities across British Columbia.”

Residents in smaller communities are concerned that people visiting vacation homes and fishing lodges could potentially bring COVID-19 with them by making non-essential trips, Henry said.

Resources may not be available to support visitors who become ill while they're away or for those who live in small towns if the virus is transmitted.

Enforcement is complicated because provincial orders are enforced by bylaw officers and public health officials while the RCMP is responsible for policing the Quarantine Act, which the federal government introduced last week requiring everyone arriving from overseas to self-isolate for 14 days, Henry said.

“It has been a bit of a process to make sure how that is operational across the country,” she said, adding the Mounties are working with Canada Border Services personnel and the Public Health Agency of Canada as part of their enforcement duties.

Most of the cases that have been investigated in B.C. have involved people who don't understand what's expected of them, Henry said.

”So that's step number one. And for the most part when we (are clear) people are compliant and that's the approach that we recommend taking.“

Health Minister Adrian Dix said more needs to be done at airports and at border crossings to enforce the Quarantine Act, which has been discussed with the federal government.

“The excuse of whether people were adequately contacted at the airport or not is not an excuse for people not to comply with the order,” Dix said.

“This is especially true in these times where such enormous efforts are being made by the government of Canada to help people come home, setting up a series of flights, many flights that are going to bring people back to Canada from all around the globe.”