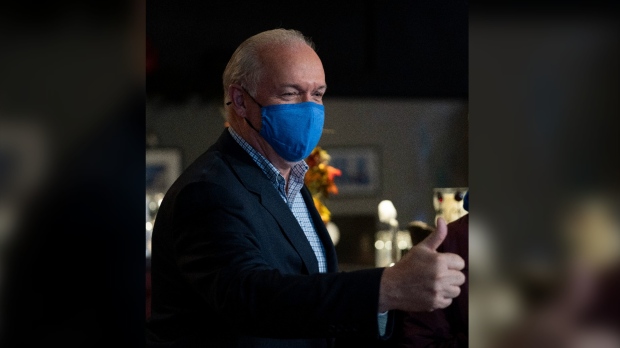 NDP Leader John Horgan gives the thumbs up as he attends a campaign stop in New Westminster, B.C. Friday, October 23, 2020. The British Columbia provincial election is on Oct. 24th. THE CANADIAN PRESS/Jonathan Hayward

Voters in British Columbia cast ballots today in an election campaign that was largely defined by the COVID-19 pandemic.

He argued the province needs a majority government to deal with the uncertainty caused by the new coronavirus.

Calling the election was a gamble for Horgan, who faced criticism from B.C. Liberal Leader Andrew Wilkinson and Green Leader Sonia Furstenau for pulling the plug on his minority government.

They called the move unnecessary at a time when people need stability, but Horgan said that's exactly what he is seeking.

At dissolution, the NDP and Liberals were tied with 41 seats in the legislature, while the Greens held two seats, there were two Independents and one seat was vacant.

Liberal Leader Andrew Wilkinson talks with a supporter during a campaign stop in Port Moody, B.C. on Friday, October 23, 2020. A provincial election will be held in British Columbia on Saturday. THE CANADIAN PRESS/Darryl Dyck