A one-month-old child is in hospital with serious injuries after a fire at a home in the Jane and Finch area Wednesday afternoon.

Firefighters were called shortly before 5:30 p.m.

According to Toronto Fire Services, the one-month-old girl was with her eight-year-old sister who was playing with a lighter in a second-floor bedroom at a home on Driftwood Court.

While playing with the lighter, the older girl set fire to laundry in the bedroom. The one-month-old child sustained serious burns to their face, nose and arms.

The eight-year-old girl did not suffer any injuries, police said.

The girls were being watched by their grandmother at the time, firefighters said. She was not in the room when the fire started.

Firefighters said that when the woman discovered the fire and her injured grandchild, she took the one-month-old girl to their mother who was at a nearby location.

The child’s mother then called 911.

Fire crews first attended the scene where the mother was with her injured child, before being directed to the house where the fire continued to burn.

Crews were able to knock the fire down at around 5:45 p.m. Damage to the home has prevented the family from returning tonight.

The office of the Ontario Fire Marshall is currently investigating. 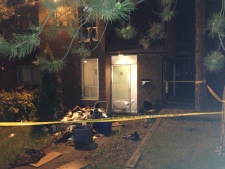 Police tape and debris is seen outside a home on Driftwood Court following a fire that seriously injured a one-month-old baby on Wednesday, May 13, 2015.