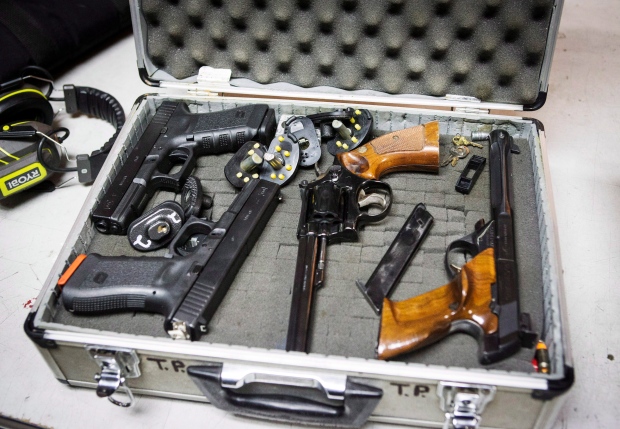 A case full of guns is seen in Ajax, Ont. in this file photo from Tuesday November 5, 2013. (Mark Blinch/The Canadian Press)

The analysis by The Canadian Press found that Canadian exports to those countries swelled by 100 per cent from 2011 to 2012, the most recent figures publicly available.

During the same time period, exports of Canadian weapons also increased to Pakistan (98 per cent), Mexico (93 per cent) and Egypt (83 per cent), where, respectively, al-Qaida terrorists, a deadly government war on drug cartels and seismic political upheaval have sparked violence.

Though Canada's arms trade is legal and regulated, analysts say the increases raise questions about the government's foreign policy commitment to human rights, and its regulatory regime for arms exports.

"Diversification is a principle of business in this globalized economy. As we see western militaries decrease their defence budgets, military industries will be looking for new markets," said Walter Dorn, the chair of international affairs studies at the Canadian Forces College.

"The danger is that the almighty dollar may become the predominant motivator in trade deals and therefore weapons are more easily shipped."

The Canadian Press provided a list of questions to the offices of International Trade Minister Ed Fast and Foreign Affairs Minister John Baird, but an emailed reply from Foreign Affairs left many of them unanswered.

Foreign Affairs carefully reviews all export of weapons to ensure they "do not contribute to national or regional conflicts or instability" or "are not used to commit human rights violations," the statement said.

The analysis examined 10 years of Industry Canada data on a class of exports that is made up of military weapons, guns and ammunition, along with howitzers, mortars, flame throwers, grenades and torpedoes. It does not include other big military equipment such as vehicles, aircraft and other advanced technology, which balloons Canada's overall arms trade into the billions of dollars.

Last month, Fast announced that Canada would be putting economic interests at the centre of foreign policy. The shift to "economic diplomacy" is designed to increase trade and investment in emerging markets.

In 2012, Canadian weapons manufacturers found some new customers, which offset a decline in sales to some major democratic allies.

That modest 2012 increase came despite a noticeable decline in exports to traditional allies such as the United Kingdom (down 10 per cent), Italy (37 per cent), Netherlands (40 per cent), Belgium (87 per cent) and Spain (132 per cent).

Canada's leading customer by a massive margin is the United States, where annual exports have averaged $190 million over the last decade. They climbed nine per cent from 2011 to 2012, to $178 million, but that marked a drop from a high of $294.5 million in 2007, when fighting in Iraq and Afghanistan was at its peak.

The numbers in question may be relatively small compared with Canada's overall arms trade and the massive global industry, but they still raise a "red flag," Dorn said.

"It is really strange timing that Canada would be increasing a sale of arms or military equipment, let's say, at this moment when Bahrain has been involved in violently repressing its own peaceful democracy demonstrators," said Roland Paris, director of the Centre of International Policy Studies at the University of Ottawa.

Bahrain violently suppressed pro-democracy demonstrators in 2011 with the help of Saudi Arabian forces. Earlier this year in Algeria, a terrorist attack on a desert gas plant -- two Canadians were among the militants -- resulted in the deaths of 29 attackers and 37 hostages. Meanwhile, in Iraq, thousands have been killed this year in continuing violence.

Baird visited all three countries earlier this year, noting that Canada is seeking to make economic inroads with each.

Paris said Baird's relative silence on the Bahrain crackdown in particular "raises questions about the consistency of our policy and it suggests hypocrisy."

Dorn said it is fair to ask -- but harder to answer -- whether weapons from Canada may have found their way into the hands of rights abusers, be they despotic governments, rebels or criminals.

"It would be shocking if Canada supplied arms to suppress a democratic movement," he said. "The Industry Canada data table doesn't list the types of weapons that are sold. It doesn't give any details so we are left to wonder what the weapons are."

Foreign Affairs said in its statement that "the declared end-use and end user of a proposed export are important factors in our review."

Dorn said Canada does what it can to prevent its arms from being diverted into the wrong hands by insisting that its customers sign end-user certificates that bar transfers.

But Dorn said the documents have been abused in the past, especially by some African countries.

"If people want to find a way, they will always find a way. You can't have a foolproof system where no arms are diverted," Angela Kane, the UN's high representative for disarmament affairs, said in an interview.

"It's just insane . . . I also think about the humanitarian consequences. What are the arms used for?"

Dorn and Kane suggested Canada should stop its foot-dragging and sign the UN Arms Trade Treaty (ATT), an attempt to regulate the multi-billion dollar industry.

Dorn said the treaty would force Canada to tighten its export control regime on weapons.

Paris said that fact that Canada has yet to sign the treaty "raises questions about whether Canada is drifting from being a leader to a laggard in arms control."

Baird has said Canada wants to study whether the treaty would infringe the rights of domestic gun owners.

Kane said it would not affect domestic gun ownership anywhere.

Last month, when he announced Canada's foreign policy shift, Fast said that he personally raises human rights concerns with his counterparts, but he declined to give specifics.

"Whenever we travel abroad, we raise issues of human rights wherever they may be appropriate."