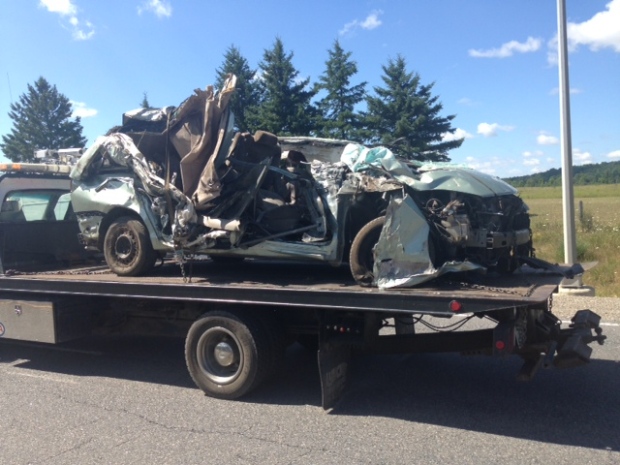 A vehicle that was involved in a fatal crash in Caledon on July 26 is shown. (Cam Woolley)

The 14-year-old boy charged in a crash in Caledon last month that left a 12-year-old girl dead briefly appeared in an Orangeville courtroom on Friday morning.

OPP say a Toyota Sienna minivan was heading north on Hurontario street in the early hours of the morning on July 27 when it crossed the centre median and struck an object off the shoulder of the roadway.

The 12-year-old female passenger in the van was pronounced dead at the scene. The boy behind the wheel was taken to hospital for treatment of non-life-threatening injuries and later released.

Police later said the minivan had been stolen prior to the crash.

The godfather of the young girl who died in the crash said she was fun to be around and “full of life.”

The driver was charged with criminal negligence causing death, dangerous operation of a motor vehicle causing death, possession of property obtained by crime above $5,000 and failure to comply with an undertaking.

His bail hearing has been put over to Sept. 7.