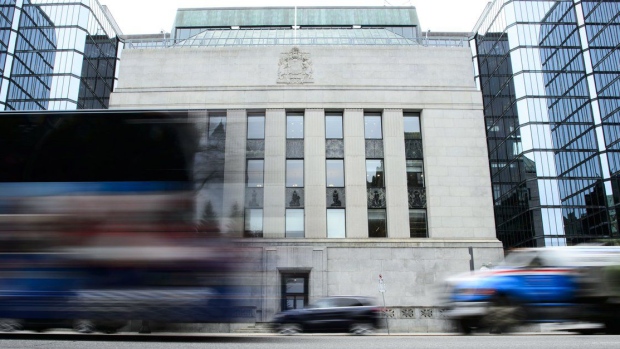 The Bank of Canada in Ottawa is seen on Thursday, May 16, 2019. Bank of Canada deputy governor Sharon Kozicki gives a speech to the U.S. Federal Reserve Bank of San Francisco by webcast. THE CANADIAN PRESS/Sean Kilpatrick

OTTAWA - The Russian invasion of Ukraine is adding to inflationary pressures around the world and in Canada, a senior Bank of Canada official said Friday.

In a speech by webcast to a conference at the U.S. Federal Reserve Bank of San Francisco, deputy governor Sharon Kozicki said inflation in the near term is expected to be higher than the central bank projected in January due to the surge in prices for oil and other commodities.

“A key concern for us is the broadening of price pressures - around two-thirds of the components in the consumer price index are now exhibiting inflation above three per cent,” Kozicki said in the prepared text of her speech.

The Bank of Canada's next interest rate announcement is set for April 13 when it will also update its quarterly economic forecast.

Kozicki said she expects the pace and size of the rate increases to come and the bank's plan to allow its holdings of Government of Canada bonds to shrink will be key parts of the central bank's deliberations.

The Bank of Canada raised its key interest rate target by a quarter of a percentage point to 0.5 per cent earlier this month in a first move to help fight inflation. The central bank has said that higher rates will be needed as it works to bring inflation, which sits at a three-decade high, back under control.

Statistics Canada reported earlier this month that the annual pace of inflation in February climbed to 5.7 per cent, up from 5.1 per cent in January.

In her speech, Kozicki said the pandemic has had an uneven impact on households with low-wage workers, especially women and young people, being the hardest hit.

Kozicki noted that the bank has been working to build its ability to better understand the range of household experiences across the Canadian economy.

“Most people who could work from home kept their jobs and saw little or no interruption to their income. Meanwhile, measures to contain the virus hit some services - such as restaurants, accommodation, travel and entertainment - especially hard,” she said.

“Many people in these sectors lost their regular sources of income. The impact was most severe for low-wage workers, especially women and young people, with child care challenges exacerbating the situation for many women.”

And now, those with low incomes are also being hit especially hard by inflation.

“With everyday items such as gas and groceries facing some of the fastest price gains, all households are affected by high inflation. But my colleagues and I are mindful that this is especially painful for those with low incomes, because they tend to spend a greater share of their earnings on such items,” Kozicki said.

This report by The Canadian Press was first published March 25, 2022.