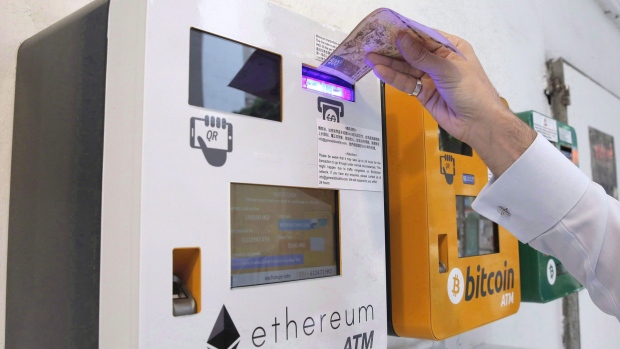 A man uses the Ethereum ATM, beside a Bitcoin ATM, in Hong Kong on May 11, 2018. THE CANADIAN PRESS/AP, Kin Cheung

CALGARY - A senior Bank of Canada official says the central bank is looking at the key questions around the design of a digital currency and the issues surrounding such an idea.

However, deputy governor Timothy Lane says that unless the risks associated with a central bank digital currency can be managed through appropriate design, the bank would not recommend issuing such a currency.

In a speech at the University of Calgary, he said major reasons for caution include worries it could become a vehicle for illicit transactions or that it could have negative implications for financial intermediation.

Lane says the central bank uses the term cryptoassets to describe cryptocurrencies because they do not do a good job of performing the basic functions of money.

However, he says, as they evolve they may touch on the central bank's core functions including monetary policy, financial stability, payments and currency.

The value of bitcoin has swung wildly with it topping US$20,000 last year and now trading around US$6,000.