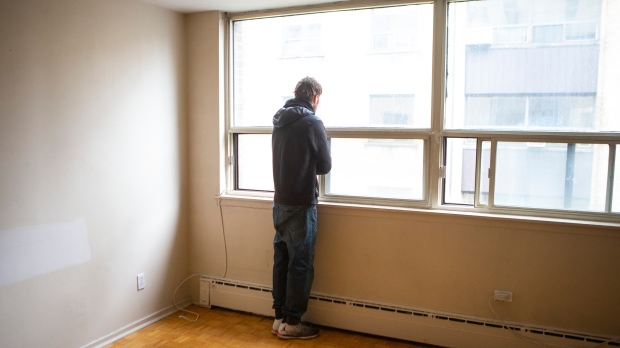 Chris Bell, who has been on the streets for the past 24 years, looks out of the window of a temporary apartment he is housed in by the City of Toronto with the help of The Sanctuary, a respite centre he has been attending for the last 20 years, on April 30, 2020. THE CANADIAN PRESS/Chris Young

TORONTO - Tensions are high in midtown Toronto as some residents want new homeless shelters moved, while the city says people in the community must learn to live with their new neighbours.

A group of local residents are set to protest the shelters this weekend, saying they fear for their safety, while those living in the buildings say they are being discriminated against.

Melanie Ward launched a Facebook group three weeks ago to discuss issues in the neighbourhood. Thousands have flocked to the page to detail a litany of concerns, from excess needle waste to public defecation to assaults, break-ins and thefts.

They cite the location of the shelters - two apartment buildings and a nearby hotel - as problematic because they are near schools, daycares and other businesses.

“I moved here in 2005 because it was safe,” she said. “I'm a female by myself and don't want to be nervous walking around and looking over my shoulder.”

Jen Reece, who lives in one of the repurposed apartment buildings on Broadway Avenue, said she feels hurt by the backlash.

“The vast majority of us are good people, but apparently we are offensive that we even exist,” she said. “Oh no, somebody has to see somebody being poor for a minute.”

Reece, who said she's been “living rough” for a year and a half, said the apartment has given her a “sense of self,” but she's disappointed by the community's reaction.

“I think they feel we don't belong here, we belong downtown with all the soup kitchens.... I can't believe there will be protests - protesting humans, it's hard to believe.”

Toronto police Const. Caroline de Kloet acknowledged there have been reports of discarded needles in the area, but said it's “too early to determine” if there is a link between recent break-ins and the shelters opening.

Last week, a city social worker was stabbed in the lobby of one of the buildings, police said. There has also been a fire at one of the residences, and at least one overdose death.

The three residences house a couple hundred people, the city said in a statement. Many of them had previously been living in encampments that popped up as the pandemic took hold. Dozens have told The Canadian Press that since the COVID-19 pandemic began, they felt safer in a tent than in the city's crowded shelter system.

In an effort to curb the spread of COVID-19 among the homeless population, the city has been undertaking a massive relocation effort. It has bought or leased 27 buildings similar to the ones in midtown, and moved 3,849 people out of the old shelters into either temporary or permanent housing.

Those new locations are scattered throughout the city - some of them in the inner suburbs that are far from their downtown support services.

Mary-Anne Bedard, Toronto's general manager of shelter, support and housing administration, said she understands the concerns of people in the midtown area.

“This is a neighbourhood that previously hasn't had a shelter, so they're not necessarily used to seeing these types of people,” she said. “It is a fact of daily life for many people right across the city - it is a fact that community needs to come to terms with.”

Bedard said the city does not need a neighbourhood's permission to place a shelter there. She said the city usually finds a new location for a shelter, then informs the community and listens to their concerns before it opens.

But due to the pandemic, that process was reversed, and Bedard is asking for compassion from the neighbourhood.

Lorraine Lam, an outreach worker at Sanctuary Ministries Toronto, a downtown drop-in centre, said the city should have consulted with the neighbourhood earlier.

“These shelters were very reactive - the need to get people out of the tents and get them out of public sight,” she said. “Now these shelters have opened up and are basically warehouses with little supports.”

Lam said there are several organizations in the area that could help, including numerous churches and the Out of the Cold program, which have experience dealing with the homeless.

However, Lam said she believes the community will come around through engagement and education.

“I think a lot of it might come from fear and not knowing the other side,” she said.

“There needs to be conversations to help the neighbourhood understand.”

The city has scheduled a community engagement meeting next week.