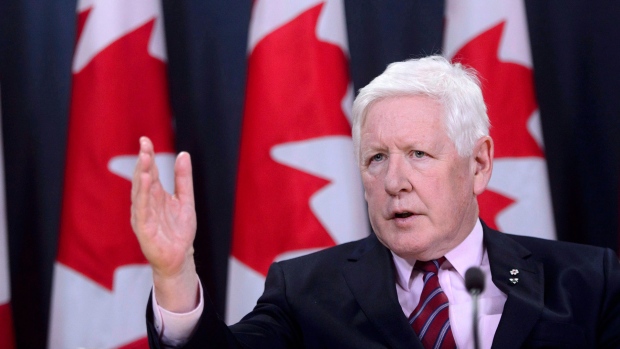 Canadian special envoy Bob Rae releases a report on the humanitarian and security crisis in Myanmar at a press conference in Ottawa on Tuesday, April 3, 2018. THE CANADIAN PRESS/Sean Kilpatrick

OTTAWA - The Chinese government is firing back at Canada's ambassador to the United Nations for calling on the UN to investigate whether China's persecution of ethnic Muslim Uighurs in its Xinjiang province is a genocide.

During a news conference Monday in Beijing, Chinese foreign ministry spokesman Zhao Lijian described Bob Rae's comments as “ridiculous,” adding that Canada itself better fits the description of having perpetrated a genocide.

Rae told the CBC on Sunday that he has asked the UN Human Rights Council to investigate China's treatment of the country's Uighurs in Xinjiang.

Last month a Canadian parliamentary subcommittee concluded in a report that China's treatment of the Uighurs is a genocide. China rejected that report as baseless.

China has been accused of using forced birth control to limit Uighur births, and detention camps to indoctrinate the mostly-Muslim minority into mainstream Chinese society. Beijing has denied any wrongdoing, saying it is running a voluntary employment and language-training program.

Zhao on Monday used a number of select statistics that suggest China's Uighur population is growing at a faster rate than Canada's population to mock Rae's suggestions that the Uighurs are being persecuted.

“I would like to ask this ambassador, if his logic is plausible in finding out who best fits the label of genocide, it seems that it is not the Uighurs who are persecuted, but rather the people of Canada, am I right?” Zhao said.

However, Zhao's statistics appear to have been incomplete or inaccurate and did not address a report by The Associated Press in June that birthrates have been dramatically cut in Uighur-dominated areas of Xinjiang.

Rae told the CBC on Sunday that “there's no question that there's aspects of what the Chinese are doing that fits into the definition of genocide in the genocide convention.”

Yet even as he levelled the allegation, he said an investigation needs to be conducted to gather the required evidence.

In response, Zhao questioned how Rae “reached his conclusion without any evidence?”

Foreign Affairs Minister Francois-Philippe Champagne did not dispute Rae's assertion of a genocide but he would not repeat it either.

“We have expressed on many occasions that we are gravely concerned about the situation in Xinjiang,” he said following a cabinet meeting Monday.

Champagne said he's raised the issue privately and publicly with China's foreign minister and he noted that Canada has joined 38 other countries in calling for experts to go into Xinjiang “to assess the situation and to report back.”

“We will stand up, we will speak up whenever we feel it is appropriate,” Champagne said, maintaining that human rights are a core pillar of Canadian foreign policy.

Relations between Canada and China are at an all-time low not only because of Beijing's treatment of its Uighurs, but also due to its continued detention of two Canadian citizens in retaliation for the arrest of Huawei executive Meng Wanzhou.

Canada has also joined Western allies in condemning Beijing's recent actions in Hong Kong, where the Communist regime has been accused of violating international agreements by cracking down on democracy in the former British colony.

Champagne said the government is also taking “very seriously” reports that China has sent covert agents to Canada to spy on and intimidate Chinese-Canadians.

“We are very much seized of that,” he said, adding that foreign interference “won't be tolerated.”

“We are working now with CSIS, with the RCMP, with Minister Blair to come up with a framework to make sure that we can continue to protect Canadians in light of this new threat.”

At a meeting Monday evening of the Canada-China relations committee, Immigration Minister Marco Mendicino was repeatedly asked by opposition MPs whether Canada has revoked visas for anyone involved in acts of intimidation against Chinese-Canadians.

He would not answer directly, saying it would be inappropriate to comment on individual cases. But Mendicino did say that conduct that amounts to espionage or interference or a criminal act in Canada is taken seriously by public safety officials.

This report by The Canadian Press was first published Nov. 16, 2020.