Bell to launch service to take on Netflix, CEO says 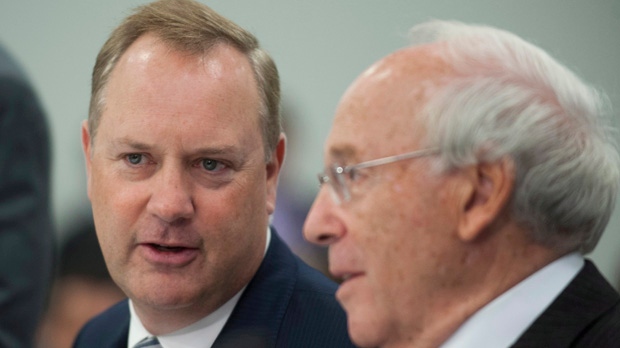 BCE CEO George Cope, left, speaks with Astral Media president and CEO Ian Greenberg in Montreal on Monday, Sept. 10, 2012, on the opening day of the CRTC hearings into the proposed acquisition of Astral by Bell. (The Canadian Press/Graham Hughes)

MONTREAL -- Bell will launch a "made-in-Canada" competitor to Netflix and other big U.S. online TV and entertainment providers, CEO George Cope said Monday as part of his pitch for the company's $3.4-billion acquisition of Astral Media.

The service would be available on demand on any device, and showcase Canadian and international movies from Astral's pay TV services, such as HBO Canada and The Movie Network, as well as news, sports and entertainment content from Bell Media.

"(It's) a made-in-Canada service -- available in English and French everywhere we have rights -- to all Canadians through the cable, satellite or IPTV provider of their choice," Cope told a CRTC hearing into the acquisition.

More than 10 per cent of Canadians now subscribe to Netflix, which accounts for more than 11 million hours of TV viewing per week, Cope said.

"The Canadian system needs companies with the scale to compete against foreign content companies like Netflix, Apple, Google and Amazon," he said.

"With scale, Canadian companies can make the investments in Canadian content and technology required to go head-to-head with these well-financed global competitors."

He noted that Netflix doesn't pay taxes in Canada and doesn't contribute to Canadian programming.

Cope didn't say when the service will launch, how much it will cost, or provide more details on what consumers will get to watch. He said it will be available to all Canadians through cable, satellite or Internet protocol (IPTV) television provider of their choice.

The Canadian Radio-television and Telecommunications Commission hearing, which started Monday, will examine how much of the English-language TV market the telecom giant will corner if the Astral deal were to go through.

Commissioner Tom Pentefountas asked Cope if he was "pulling rabbits" out of his hat with the announcement.

Tech analyst Mike Battista said having enough content and being able to access programming on a variety of devices other than a TV will be challenges that Bell will face.

But it should appeal to "cable cutters" -- those who have dropped the monthly service, said Battista, research analyst at Info-Tech Research Group in London, Ont.

"The direction that TV is going is the Netflix model, the Apple TV model," Battista said. "They have to be there or they're going to fall behind."

For those who already subscribe to Astral's pay TV channels, it's not yet clear if the new service will offer anything different, he said. The service would likely also be subject to Canadian content rules, he added.

BCE's Canadians rivals, as well as a group of Canadians concerned about media concentration, have publicly voiced concern about the implications for the Canadian media landscape if the takeover were allowed.

The commission will examine the multibillion-dollar transaction and hear from multimedia, telecom and radio companies, and producers as well as film groups and consumer advocates -- many of them against the deal.

Cope told the hearing that with the acquisition of Astral, Bell will own 33.5 per cent of the English language market. That's under the 35 per cent threshold set by the CRTC for approval.

BCE's competitors dispute that figure and say it is higher.

Cope added BCE will boost its contribution to $241.3 million as part of a "tangible benefits" package as part of the deal.

Competitors disagree with the way BCE (TSX:BCE) calculates market share and argue it would get too much clout.

The "Just Say No To Bell" campaign's website says if the deal is successful, Bell would control 37.6 per cent of TV viewing. It wants the federal government to stop the deal.

Telus Corp. (TSX:T), for one, argues Bell would have too much control of English-language TV content and leave consumers with fewer choices and higher cable bills.

Telus has argued that the purchase of Montreal-based Astral, along with Bell's part ownership in the Maple Leaf Sports and Entertainment TV assets, and its stake in joint venture assets, such as Teletoon, would give Bell 49.5 per cent share of the English-language television audience.

A coalition comprised of Quebecor (TSX:QBR.B), Cogeco (TSX:CGO) and Eastlink have also been fighting to stop the Astral takeover.

Under the deal, 10 radio stations in five markets will be divested, BCE said.

The markets are Vancouver, Calgary, Winnipeg, Toronto and Ottawa, BCE said in a list of stations tabled with the CRTC.

Seven of the stations are owned by Astral and three by Bell.

BCE announced the Astral deal last March aimed at creating a media powerhouse poised to take on rivals in providing digital content to consumers. At the time of the deal, Cope had said the deal gives Bell important new content for online services and mobile devices like smartphones and tablet computers.

Astral CEO Ian Greenberg told the hearing Monday that BCE was the only bidder that could meet its price and not carve up his company.

"Bell will not split up the French and English assets," said Greenberg.

"If we keep fragmenting the broadcasting system in Canada it will not be as strong as it could be. Bell was by far the only buyer that could meet all of the criteria we set out."

CTV operates more than 25 stations across the country, 30 specialty channels including sports networks TSN and RDS online video programming and properties such as CTV.ca, TSN.ca, RDS.ca, MuchMusic.com, MTV.ca and TheComedyNetwork.ca. It also owns CHUM Radio, which operates more than 30 radio stations throughout Canada.

CP24 is a division of Bell Media