Bellegarde wants Brenda Lucki out as head of RCMP 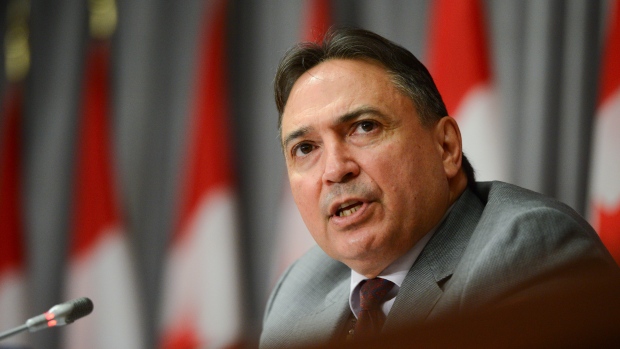 Perry Bellegarde, National Chief of the Assembly of First Nations, takes part in an event on Parliament Hill in Ottawa on Tuesday, July 7, 2020, to sign a protocol agreement to advance First Nations' exercise of jurisdiction over child and family services. THE CANADIAN PRESS/Sean Kilpatrick

OTTAWA - The Assembly of First Nations has “lost confidence” in RCMP Commissioner Brenda Lucki after months of unrest, National Chief Perry Bellegarde said Friday as he called for her resignation.

“The safety and security of all Canadians, including First Nations people, must be the top priority of the prime minister and the federal government,” Bellegarde wrote in a statement on Twitter.

He said he would be writing Prime Minister Justin Trudeau to ask him to replace Lucki with “someone who will focus their attention on public safety and combating racism.”

The call for her resignation comes as the RCMP has faced heavy criticism for its response to violence toward a disputed Mi'kmaq moderate-livelihood lobster fishery in Nova Scotia.

In statement responding to Bellegarde's call for her to go, Lucki said she's staying.

“I remain committed to fulfilling my mandate of modernizing the RCMP with a strong focus on advancing Indigenous reconciliation,” the commissioner said.

Chief Michael Sack of the Sipekne'katik First Nation in Nova Scotia said Friday he supports Bellegarde's call for Lucki to step down.

“I think (it's) definitely the right call to make, seeing what happened here on the ground,” he said.

Asked about the demand from Bellegarde Friday, Trudeau said the RCMP is responsible for keeping Canadians safe but acknowledged the criticisms of the national police force in Nova Scotia, including over its response to the massacre by a man posing as a Mountie last spring.

“We have seen some challenges in Nova Scotia, not just recently but over the past many months with the terrible tragedy, in how the RCMP has been able to deliver, but at the same time, they continue to serve Canadians day in, day out, right across the country,” Trudeau told a news conference in Ottawa.

“I've heard concerns from many Canadians about the functioning of our national police force. We'll continue to listen to Canadians and work with â€¦ the commissioner in terms of making sure that we continue to keep Canadians safe.”

Lucki has been RCMP commissioner since April 2018 and is the force's first permanent female leader.

She faced calls for her resignation in June, when she said in an interview that she believed there is “unconscious bias” in the RCMP but she was “struggling with the definition of systemic racism.” She later reversed herself in a written statement that said systemic racism does exist, though she has had difficulty citing examples.

Those remarks came at a time when there was an outcry over recent violence against Indigenous people in encounters with police, alongside a renewed focus on racism following the death of George Floyd, a Black man, at the hands of police in Minneapolis.

At that time, Trudeau expressed his confidence in Lucki, saying he has worked closely with her over the years and that he trusts her to lead reforms at the RCMP.

On Friday, NDP Leader Jagmeet Singh said he supported Bellegarde's call for her to resign.

“Commissioner Lucki denied the existence of systemic racism in the RCMP - then admitted it, but couldn't define it,” Singh wrote on Twitter.

“Now, she's defended the failure of the RCMP in Nova Scotia. Justin Trudeau said he had confidence in her,” he said.

Lucki confirmed this week more RCMP officers had been deployed to respond to the escalating treaty dispute between commercial fishers and Mi'kmaq fishers in southwest Nova Scotia.

“We're happy about that, but, unfortunately, it was a little bit late,” Sack said. “A lot of damage has already happened.”

The RCMP is investigating several assaults that targeted Indigenous people and property, including an attack on Sack. A suspect was arrested and released from custody with conditions to have no further contact with the chief.

Sack, who said he would like the military to come in, said the RCMP's shortcomings in dealing with the situation in Nova Scotia are a result of systemic racism in the police force.

“If it was the other way around, we feel there would've been way more cops in the area,” he said.

“There wasn't enough people to control the crowd,” he said.

He said Indigenous fishers feel safer on the ground now but not on the water while fishing, adding there were about 120 commercial vessels in the area, compared to one Coast Guard vessel and one small RCMP inflatable boat.

“Our people were not protected â€¦ flares were shot on them,” he said.