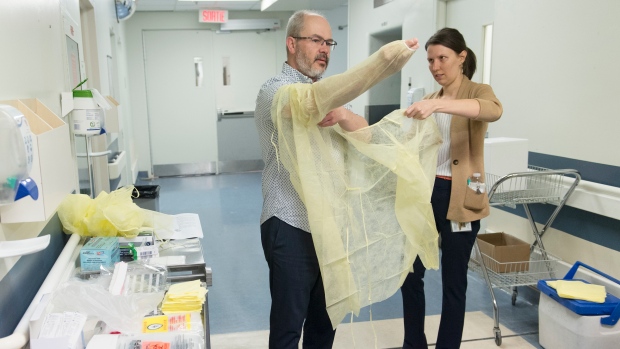 VANCOUVER -- Canada's first death from the novel coronavirus has highlighted the urgent and often ignored need for better staffing at long-term care facilities where elderly residents are especially vulnerable to the disease, says the head of the Canadian Federation of Nurses Unions.

Linda Silas said the need has become "top of mind" following the death on Sunday of a man in his 80s at a care home in North Vancouver, where another patient is infected with COVID-19. One of four care aides who contracted the illness there is in hospital and two relatives of another have also been sickened.

Discussions about preparedness were focused on emergency rooms, critical care and public health units, she said.

"A week ago we were talking about 'Is the acute-care sector ready?' " Silas said.

"Everyone's now talking about, 'What about long-term care?' "

"When it hits a long-term care facility it's always more of a crisis than if it hits even your community or hospital. We've always known it's a fragile population with any kind of illness and this (COVID-19) is one of those where we have to pay particular attention," she said.

Silas said the federation has recommended 4 1/2 hours of care by registered and licensed practical nurses per day, per resident in long-term care facilities across the country.

The actual level of nursing is about three hours, with some provinces, including Ontario and New Brunswick, among the worst as few nurses choose to work in long-term care jobs, she said.

"The working conditions are very difficult. You're working short all the time, you're never guaranteed registered nurses and often your only option is to send your patient to the hospital when often it's not what they need and what's best for them," she said.

"And your personal care workers are not often permanent employees. They work casual or part time and they work in different facilities so there's always a turnover."

Doris Grinspun, CEO of the Registered Nurses Association of Ontario, said less than 50 per cent of staff in long-term care homes work in just one facility and support workers are also employed in multiple facilities.

"Some of them work in three places," she said, adding a government directive during the SARS crisis in 2003 required nurses to work in only one facility to reduce the risk of the virus spreading.

Dr. Bonnie Henry, British Columbia's provincial health officer, said after announcing the death this week that an infected care aide from the same facility is believed to have worked at two other facilities.

"It's a challenge with our system, with care homes," she said. "We know that whether it's care workers or nurses, even physicians, we work in many different health authorities, many different facilities sometimes. That is part of the ongoing investigation at the Lynn Valley care home, to find out exactly where everybody worked and make sure that the other facilities are investigated."

Silas said a big concern is the lack of employment insurance sick leave benefits for some support workers compared with nurses.

Business and other labour groups have urged the federal government to ease access to such benefits, which the government appears open to doing, along with tax credits and other breaks as part of the federal response.

Finance Minister Bill Morneau has said the government was "looking at taking some initiatives this week" to help affected workers and the health-care system.

Government sources who were not authorized to discuss the plans publicly said Prime Minister Justin Trudeau is expected to announce federal funding on Wednesday to help provincial health-care systems cope with the new coronavirus.

Jennifer Whiteside, spokeswoman for the Hospital Employees' Union, said care aides in British Columbia work in a "fragmented" system, with some in part-time and casual jobs at various facilities run by either private contractors or health authorities.

Sick leave benefits may be as few as five to seven sick days a year versus 18 days offered by health authorities, Whiteside said, adding aides having to go into quarantine could face financial hardship because of their lower pay levels.

"Their sick leave will be wiped out. They won't even have enough to cover one period of self isolation should that become necessary and certainly not enough to cover them should they actually become sick with (COVID-19)," she said.

"If a large number get sick then we'll be having some challenges. There's no question that a situation like this does really bring into sharp relief some of the challenges we have in the system around how we manage the care-aide labour force."

Isobel Mackenzie, advocate for seniors in British Columbia, said the job of care aides has long been undervalued and the novel coronavirus may create awareness about the need for change.

"I think what this is going to highlight, and this is a conversation for after we've dealt with the crisis, is the different ways in which these care homes are staffed. We need all licensed care homes to be doing things exactly the same under the direction of the officer of the public health officer," she said.

The issue of care aides who travel to various private homes must also be considered for the safety of the wider community, Mackenzie said.

"That's where we're going to have to be ever vigilant around monitoring and managing the situation," she said. "(They) may be providing (seniors) with their medications that they absolutely need and if we don't go there they aren't going to get their medications."

This report by The Canadian Press was first published March 11, 2020.