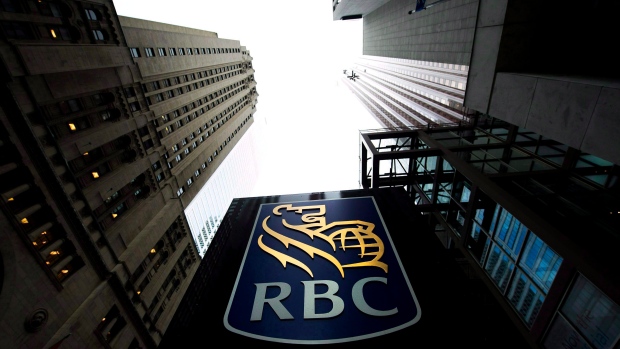 A Royal Bank of Canada sign is pictured in downtown Toronto on Dec. 2, 2011. (The Canadian Press/Nathan Denette)

TORONTO - The country's biggest five banks had a better-than-expected combined third-quarter profit of $10.15 billion helped by a strong economy, but a potential interest rate hike from the Bank of Canada could add pressure to their consumer lending books, financial analysts suggest.

The central bank's attempts to ease the country's oversized growth could have an impact on growth momentum, said Barclays analyst John Aiken. He advises bank watchers not to count on Canada's “over the top” economy for much longer, which raises questions about the pace of the banking industry's blockbuster earnings increases.

“(The bank's) visibility might be exceptionally strong for the next three months, but it's very difficult to start to extrapolate further out there,” Aiken said.

TD Bank (TSX:TD) wrapped up the banks' earnings season Thursday with a 17 per cent increase in profits to $2.77 billion, anchored by a strong performance at its retail operations in both Canada and the United States.

Scotiabank (TSX:BNS) and BMO (TD:BMO) reported net profits also got a boost from the same quarter a year ago, while RBC (TSX:RY) and CIBC (TSX:CM-O) reported declines. But overall, analysts said the results were better than they had expected.

The Canadian retail banking arm grew 14 per cent over last year on benefits from lower insurance claims, growth in wealth assets and a record level of real estate lending originations - which include new mortgages and renewals. Overall, the division accounted for $1.73 billion of net income for the three months ended July 31.

“The outperformance is partly attributable to a more favourable operating environment in the U.S. and more recently in Canada where stronger-than-expected economic growth has boosted activity in our businesses,” TD Bank chief executive Bharat Masrani said in a conference call with analysts.

Also on Thursday, Statistics Canada reported second-quarter GDP data that blew away forecasts with an annualized growth rate of 4.5 per cent - resulting in the strongest expansion of the economy in the first half of the year since 2002. Those figures add further credence to predictions the central bank will make a second move of the benchmark rate in the coming weeks.

Many observers note plenty of uncertainty could emerge next year as the Bank of Canada and U.S. Federal Reserve contemplate further interest rate hikes. In Canada, debt loads are sky high and a potential economic shock that could hit household incomes could affect some Canadians' ability to pay back loans.

However, Canada's big five financial institutions are charging ahead with steadfast optimism in their outlook.

BMO and Scotiabank, which both reported improved third-quarter earnings on Tuesday, expressed confidence in the pace of economic growth, especially after talking to their corporate clients in the United States and Canada.

It's a rarity within the country's relatively conservative banking industry to hear executives across several of the banks speak with such confidence in the face of many lingering questions about interest rates and the broader economy, but analysts suggest it could be taken as a good sign.

“This is one of the more bullish quarters in terms of outlook for the banks that we've seen in a while,” Aiken said.

What plays out after the central bank's next rate cut will be telling for the momentum of Canada's economic growth next year, he added.

“The biggest swing factor is really going to be what the housing market in the GTA does in the fall when we get a little more normal activity.”

Aiken will be paying attention to the direction of housing prices, which are likely to solidify consumer confidence and keep borrowing intact if they stabilize.

None of these signs are likely to emerge for several quarters, said Gareth Watson, vice-president of investment management at GMP Richardson Ltd.

“The fallout or impact of higher interest rates on the consumer rarely is felt immediately,” he said.

“Because rates may have gone up at the Bank of Canada once doesn't mean all the sudden you can't afford your home today. But it might be a different story five years from now when you go to renew your mortgage.”