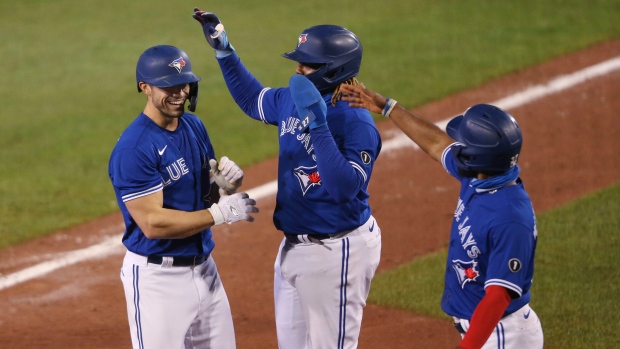 The Blue Jays need another victory in Sunday's regular-season finale, and a Miami win over the Yankees in New York, to move up to second place in the AL East and the fifth seed in the league. If not, Toronto will drop to eighth, and a first-round playoff meeting with the top-seeded Tampa Bay Rays.

Means walked infielder Jonathan Villar, the second batter of the game, and didn't allow another baserunner until Biggio connected on a 1-0 pitch. The drive to right ended a streak of 16 consecutive outs by Means, including five straight strikeouts at one stretch. The left-hander struck out nine and walked one in six innings.

Grichuk connected on the first pitch he saw from Hunter Harvey in the seventh. It was his 12th homer of the season and the 19th of his career against the Orioles, more than he's hit against any other opponent. Grichuk also homered in Toronto's 10-5 win Friday.

The Blue Jays scratched right-hander Matt Shoemaker, the scheduled starter, and turned to right-hander T.J. Zeuch. Instead, Shoemaker threw a side session before the game, meaning he could be used in the opening round of the playoffs.

Chase Anderson (1-2) got the win, striking out the first four batters he faced in a two-inning relief stint. Anthony Bass got the final four outs for his seventh save in nine chances.

Blue Jays outfielder Lourdes Gurriel Jr. yelped in pain after he fouled a pitch off his left foot in the second inning. Gurriel batted again in the fifth, but he was replaced by Grichuk in the top of the sixth. The Blue Jays said Gurriel had a contusion on his foot.

Austin Hays had three hits and Jose Iglesias had two doubles and drove in a run, but the Orioles lost for the eighth time in 10 games. Baltimore has lost 14 of 18 overall.

Blue Jays: Manager Charlie Montoyo said LHP Hyun Jin Ryu is not hurt, but would not commit to starting Ryu in Game 1 of the playoffs. Montoyo said Friday that Ryu was “a little sore” after throwing a season-high 100 pitches over seven innings against the Yankees on Thursday. â€¦ INF Rowdy Tellez (right knee) ran the bases and hit on the field before the game. â€¦ RHP Ross Stripling left after being hit on the right shin by DJ Stewart's comebacker in the eighth.

Orioles: GM Mike Elias confirmed that RHP Michael Baumann was shut down after straining a flexor muscle in his elbow at the team's alternate training site. One of Baltimore's top prospects, Baumann is expected to be healthy by spring training. â€¦ Elias also said he is optimistic OF Trey Mancini will be able to play next season. Mancini missed this season while undergoing treatment for colon cancer. Mancini completed chemotherapy treatment last Tuesday.

Villar stole third base on catcher Pedro Severino's throw back to the pitcher in the eighth.