The final vehicles to be produced at the General Motors plant in Oshawa have rolled off the assembly line, bringing an end to more than a century of automobile manufacturing at the facility.

General Motors initially announced the closure of the plant in November 2018 as part of a company-wide restructuring but production was only halted on Wednesday with the final vehicle to be produced at the plant, a GMC Sierra truck, rolling off the line sometime in the late afternoon.

“It was bittersweet. I am a third generation autoworker and I have seen a lot of vehicles roll off the lines. I never thought I would see the final vehicle,” GM worker Mike Mutimer told CP24 after finishing off his final shift at the plant. “It wasn’t a celebration. There were people cheering, we have a lot of retirees and I get that, but it just wasn’t a happy day for many of us.”

The closure of the Oshawa plant was initially supposed to result in the elimination of 2,600 unionized jobs, though the company subsequently announced plans to keep about 300 jobs at the facility by converting it to a stamping and sub-assembly operation. GM will also convert a 55-acre plot of land at the southern end of plant into a test track for its autonomous and electric vehicles.

Of the affected workers, about 1,200 have qualified for full retirement packages.

“I am going to miss it. I am kind of emotional leaving because it has always been my life. It was the only place I have ever worked, as soon as I was a teenager, and it has been a great, great place to work,” Al Nice, who has worked at the plant since 1967, told CP24 as he showed up for his shift on Wednesday morning. “I am getting to the age where I was going to retire anyway but I feel bad for a lot of the younger ones in the middle there that don’t have enough years to fully retire and they need to find other jobs.” 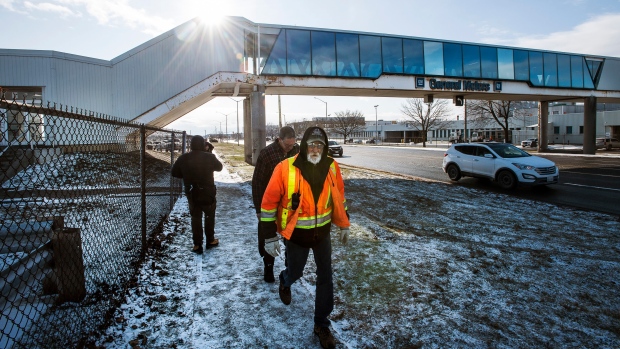 General Motors has been producing vehicles in Oshawa since 1918 and opened the current plant in 1953.

Over the years, the plant has produced dozens of different models of vehicles, including the Chevrolet Impala, the Chevrolet Equinox, the Cadillac XTS and for the last two years the Chevrolet Silverado and GMC Sierra.

“It is the end of an era but you have to stay positive and look forward to maybe better technology for the future,” another worker told CP24 on Wednesday. “Yeah it sucks that this place is leaving but you also have to stay optimistic that there is going to be something else back here.”

GM has offered to retrain workers

GM has offered to retrain some of the workers affected by the closure of the plants so that they can work as vehicle technicians at local dealerships.

It has also helped to match up the affected workers with 45 different employers, who currently have an estimated 5,000 job openings.

“We have worked really hard to make sure that every one of these employees has an opportunity to land on their feet either with very generous pensions and retirement packages as well as other transformation supports for people that can move into new jobs,” David Paterson, GM's vice president for corporate and environmental affairs, told CP24 on Wednesday. “We have had 45 employers line up because these are good quality people. These are people that are tops in quality and productivity and they are the kind of employees you want if you are in a manufacturing business.”

Patterson conceded that it will be a “tough day” as many workers, some with significant family history at the plant, say their goodbyes.

He said that General Motors, however, remains committed to maintaining and growing its “footprint” in Oshawa.

“It is a transformation. We are investing $170 million in the plant and we have been working very hard over the last year to get ready to put a new parts manufacturing business in the plant. It is only 300 people to start with but the intention is to grow,” he said.

Plant once employed more than 20,000 people

In its heyday, General Motors employed more than 20,000 people in Oshawa but the manufacturer had started whittling down its workforce, even prior to the onset of the 2008 financial crisis.

Speaking with CP24 on Wednesday, Oshawa Mayor Dan Carter said that the city has been going through a “transformation” over the last 18 years and now has a much more diverse economy than it once did. Carter said that 11,000 people work in healthcare related businesses in Oshawa and approximately 9,000 work in the tech industry.

“I am very anxious for this moment and I have been anxious for a year since the announcement came down but I am also excited about the future that awaits us,” he said. “I think what we have to do is reflect upon the 100 years of history of General Motors and what that really means but then look to the future. Why I am so optimistic even in these moments is because of this – the people who have dedicated their lives to General Motors have been recognized for quality, productivity and innovation and that still lives here in the great city of Oshawa. That is why I believe that companies around the world will come here look to employ our people and we will still be a big part of the automobile industry, it will just be in a different way.” 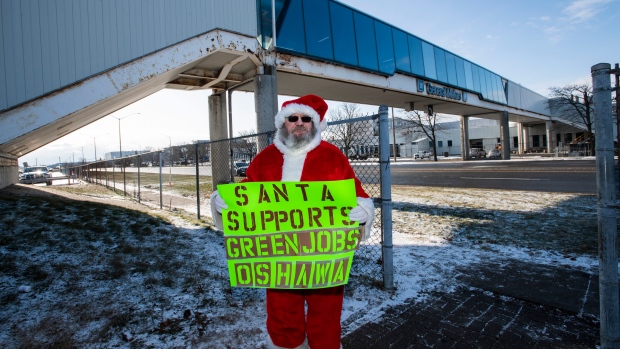 Workers at parts suppliers will also be laid off

In addition to the workers directly employed by General Motors, there are also thousands of others who work at parts suppliers that are either located in the plant or nearby.

One of those workers, Roy Egan, told CP24 that there are about 10 companies that provide the plant with parts, including his. He said that all told about 1,800 workers at parts suppliers that serve the plant will lose their jobs.

“I will have to just take a couple weeks off and regroup and then find something else to do for a new chapter in my life I guess,” he said. “We have an action centre that will help a lot of people get rerouted into new jobs and things. It is just a matter of who is hiring and what kind of experience they are looking for.”