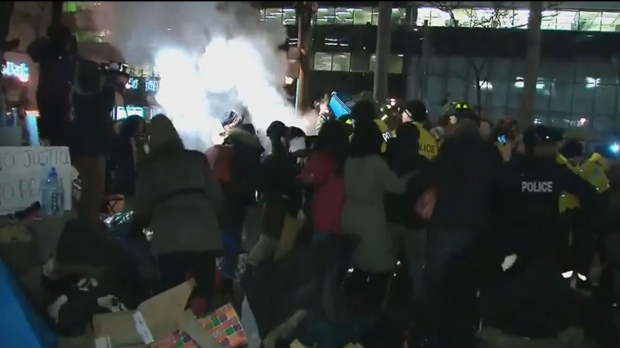 Black Lives Matter demonstrators clashed with officers outside Toronto police headquarters last night as the group continued to protest the SIU’s decision not to lay charges against the officer who killed 45-year-old Andrew Loku.

Shouting and shoving could be seen outside the College Street building as police took down the protesters’ tents and extinguished a fire.

On social media Monday night, police said officers needed to remove the items from the area due to safety concerns and added the peaceful protest would be permitted to continue.

The protests began on Sunday night following the release of an SIU report that concluded an officer who shot and killed a 45-year-old Toronto man used justifiable force.

Loku was killed on July 5, 2015 following a late-night interaction with Toronto police at an apartment building in the area of Caledonia and Rogers roads.

In a news release sent out Friday, the SIU said two officers were called to the building after receiving reports that Loku, armed with a hammer, was threatening to kill a woman.

According to the SIU, the officers confronted Loku in a third-floor hallway and ordered him to stop and drop the hammer.

The SIU report states that Loku was shot twice after he refused to drop the weapon and moved within two to three metres of the officer who pulled the trigger.

Members of the group said the police officer used excessive force and did not properly deal with the man, who was in distress at the time.

“After the decision of the SIU… Andrew Loku has once again become one more statistic in a long line of black men living with mental health issues killed at the hands of the Toronto police,” Aseefa Sarang, the executive director of Across Boundaries, a Toronto community mental health centre, said Monday.