Members of Black Lives Matter- Toronto are rallying outside the province’s Special Investigations Unit in Mississauga to protest the death of a Somali-Canadian man killed in Ottawa last month following a confrontation with police.

A photo posted on Twitter from the demonstration showed protesters holding a large banner outside the SIU building that reads “Justice for Abdirahman Abdi.”

Abdi died after what is being described as a violent arrest outside his apartment building in Ottawa back in July.

The SIU, who has been called in to investigate the incident, has not released many details surrounding the circumstances of the arrest since it occurred.

The group made several demands at the demonstration, including a complete overhaul of the SIU and that the officers involved in Abdi’s death are charged.

They also demanded Minister of Health Eric Hoskins launch an investigation into how the Ottawa hospital and paramedics handled Abdi’s death.

“Abdirahman Abdi was a man who carried some mental illness and was literally lynched by police officers in front of his home in Ottawa,” Black Lives Matter- Toronto co-founder Yusra Khogali told CP24 Wednesday. “We’re here rallying today because for 2 years we have been calling for an overhaul of the SIU. The SIU is not an accountable or transparent body.”

In addition to the protest at the SIU building, the group indicates in a press release that divisions of Black Lives Matter in Ottawa, Kitchener/Waterloo, Vancouver, Edmonton, Winnipeg, London, Hamilton and Sudbury will also hold demonstrations in their cities throughout the day.

“Today we’re here because we need to demonstrate. What people are missing here is that this community was extremely traumatized," Khogali said. “This is the first time this has ever happened. We’re the first group to come here and we’re not leaving until we see real change.”

A photo posted on Twitter by the group also indicates local musicians and poets will attend and perform during the demonstration sometime this evening.

Khogali said the rally planned for 7 p.m. will be "massive."

In a written statement released by the SIU Wednesday, the agency says all Canadians have "the right to protest and express their opinion in a peaceful manner."

"The Special Investigations Unit respects this right," the statement reads.

"Black Lives Matter Toronto has made a number of demands related to how the Special Investigations Unit fulfills its mandate of civilian oversight of police... The Government of Ontario is responsible for the development of legislation and its effective implementation. It has appointed the Honourable Michael H. Tulloch, a judge of the Ontario Court of Appeal, to lead an independent review of the SIU and two other agencies that oversee police conduct in the province." 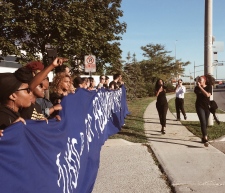 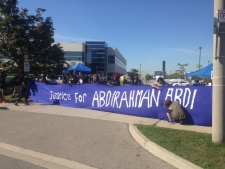