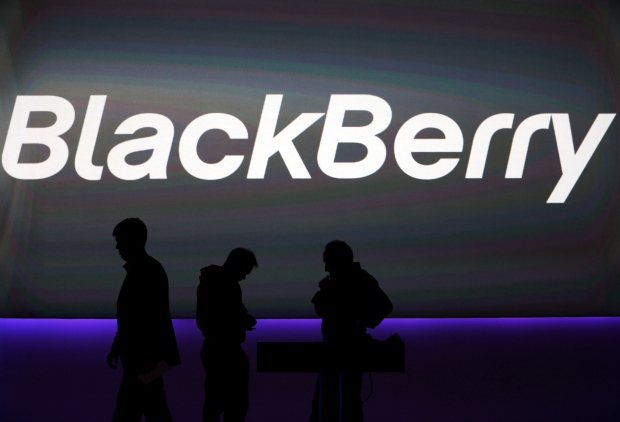 WATERLOO, Ont. -- While it's still too early to brand John Chen the turnaround king, the chief executive of BlackBerry showed Thursday that he's making headway at the struggling smartphone maker.

The company delivered a surprise to investors with a US$23-million profit for the first quarter of its 2015 financial year compared with a loss a year ago, though Chen said it doesn't mean BlackBerry's survival is entirely certain yet.

"If we do well in the next quarter or two, then I'm very hopeful," he said after the company's annual meeting.

Chen stood before shareholders for the first time since taking over the helm last year and assured them the company has plenty of ideas he believes will ensure its survival as he showed off BlackBerry's first phablet.

The BlackBerry Passport, which meets somewhere between a smartphone and a tablet in size, is scheduled to launch first in Europe this September, he said.

Chen added that products and services designed to meet the needs of the business and government sector are in development, as well as a slate of phones.

A cloud-based service from its QNX division, which develops technology for automobiles, is also part of a plan for the company to dive into the "Internet of Things," a buzzy phrase used to describe technology that connects objects to wireless networks.

"This is going to be a huge trend in five years and we're going to build up to it," Chen said.

"Everything BlackBerry does is about security -- we will not lose that fight."

He also outlined his predictions that BlackBerry Messenger will start to generate revenue in the 2016 financial year.

Chen was hired last year to reshape BlackBerry, cut costs and lead an effort to find a better footing in the highly competitive tech sector. Before he took the job, he helped turn software company Sybase into a profitable operation focused on mobile business technology.

BlackBerry is now dedicating more resources to serving business and government customers after a failed attempt to compete with Apple's iPhone and the various smartphones on the Android operating system in the consumer market.

In the short-term, analysts are still closely watching how Chen's leadership differs from his predecessors, and whether his strategy will help achieve his goal of becoming break-even on cash flow by the end of the financial year before rising to profitability in its 2016 financial year.

The latest financial results seemed to appease investors for the time being -- stock in BlackBerry (TSX:BB) jumped 10.3 per cent, or 93 cents, to $9.93 in afternoon trading on the Toronto Stock Exchange on Thursday.

A number of non-cash items pushed the company to a profit of $23 million, or four cents per share, compared with a loss of $84 million or 16 cents a year ago.

On an adjusted basis, BlackBerry reported a loss of 11 cents per share, which came in above analyst estimates of a loss of 26 cents, according to Thomson Reuters.

However, revenue tumbled to $966 million for the three months ended May 31, compared with $3.07 billion a year ago.

During the quarter, BlackBerry booked revenue for about 2.6 million smartphone sales, which is an increase from 1.3 million devices a quarter earlier.

BlackBerry also boosted its cash holdings to $3.1 billion, from $2.7 billion in the previous quarter, with the help of a tax refund and money from the recent sale of real estate assets.

Despite the positive financial report, BlackBerry still faces the challenge of a slate of smartphones that are either outdated or -- in the case of its newer models -- not selling particularly well. It's the same position the company was in before it launched its BlackBerry 10 devices.

Chen recently relaunched the older BlackBerry 9900 phone as part of a "calculated hold-on strategy" designed to keep customers satisfied in the short term before new phones come to market.

"I have some balancing acts to do between now and then," he said

"I have some revenue challenges because the new product hasn't kicked in."

While the annual meeting presentation was generally received well by the audience, there were a few moments of tension between executives and a few of the company's shareholders.

One man asked why BlackBerry's board of directors engaged in the "debacle" of exploring a potential sale of the company last year, that was eventually sidelined in favour of a cash injection from several large investors.

Members of BlackBerry's board spent nearly a minute and a half passing off the question to each other before Timothy Dattels, who headed the special committee during the search for a buyer, said BlackBerry looked at many alternatives before deciding the current path was the best option and better than no action at all.

Outside the meeting, investor Douglas Spry, who bought BlackBerry stock when it was hovering around $8 in May, said he was "quite happy" with how the company is evolving under Chen's leadership.

"He's come out with so many different avenues that he's exploring," he said.

"I don't think they'll ever be what they were before, but it'll be nice to see them become successful."