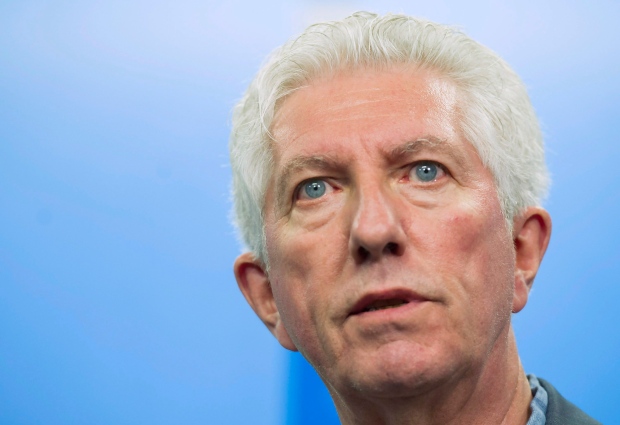 Bloc Quebecois Leader Gilles Duceppe speaks to the media at the offices of a television channel that searches for missing people during an election campaign stop in Montreal on Friday, Sept. 4, 2015. (The Canadian Press/Graham Hughes)

MONTREAL -- Gilles Duceppe, the Bloc Quebecois' first-ever MP and the man who dominated the party for nearly 15 years, stepped down as leader Thursday after a less than stellar performance in this week's election.

Duceppe's departure comes four months into his second spell as head of the sovereigntist party following a 14-year stint between 1997 and 2011.

"I am turning the page, the last page, of a passionate political adventure," he said at party headquarters.

The Bloc won 10 out of Quebec's 78 ridings on Monday, leaving it two short of the 12 seats required for official party status.

Compounding its woes was another double whammy -- Duceppe losing his Montreal riding for the second election in a row and the party garnering just 19.3 per cent of the popular vote in Quebec.

After stating earlier this week that the numbers weren't good enough, Duceppe said Thursday the 10 MPs will provide the party with stability until the next election.

"This time the Bloc's future was on the line," he said. "And my return (last June) was aimed at saving this party, which is important for the 817,000 Quebecers who voted for us.

"With the election of 10 MPs, the future of the party is guaranteed for the next four years.

"I obviously would have liked more and to have won my riding. But overall, I'm leaving with the feeling of a sense of accomplishment."

Duceppe will be replaced on an interim basis by Rheal Fortin, who was elected in a riding north of Montreal on Monday.

Duceppe first stepped down in 2011 when the party won just four seats and he lost his Montreal riding of Laurier-Sainte-Marie after holding it since 1990.

He became leader again this summer when language-activist Mario Beaulieu stepped aside to make way for the more widely known and respected politician.

Parti Quebecois Leader Pierre Karl Peladeau said Wednesday he wanted Duceppe to stay on, saying the BQ leader had a handle on federal issues as well as a good knowledge of federal intrusion into provincial jurisdiction.

The Bloc also announced that Louis Plamondon, who has been a Bloc MP since 1993, will be caucus chair, while Beaulieu will remain president and Luc Theriault will become house leader.

"We ended the election with a slight surplus, which will allow us to maintain a central office (in Montreal) at least until March," said Plamondon.