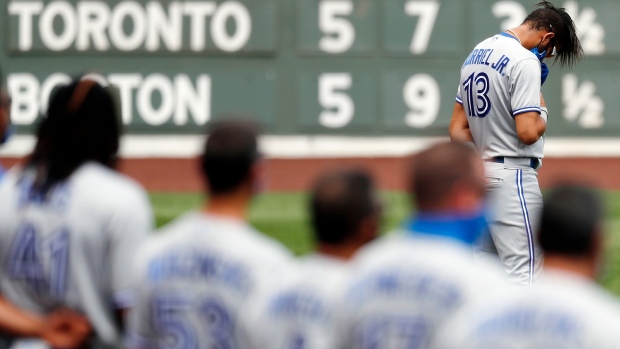 The road has been home for the Toronto Blue Jays in this truncated 60-game regular season. That won't change now that the team is set to finally begin its 2020 home schedule.

The Blue Jays settled on Buffalo's Sahlen Field as their 2020 digs after Rogers Centre was ruled out and attempts to share a big-league ballpark proved fruitless.

The team said goodbye to the Ontario capital three weeks ago. Now it's time to say hello to its temporary home in the Queen City.

“We should be able to settle in nicely there,” Blue Jays outfielder Randal Grichuk said on a recent video call. “Obviously you want to be in a major-league stadium but we're going to make do with it and make the most of it.”

Normally home to the Bisons, Toronto's triple-A affiliate, the Blue Jays (5-8) will welcome the Miami Marlins (7-3) on Tuesday for the opener of a five-game homestand that includes a weekend series against Tampa Bay. The team has dubbed it the home away from home opener.

Toronto's originally scheduled home opener was July 29 against the Washington Nationals. The Blue Jays have had to play as the home team in road ballparks while Sahlen Field was brought up to big-league standards.

Blue Jays rookie starter Nate Pearson, who spent part of the 2019 season with Buffalo, said he has enjoyed pitching there.

“I really liked the mound, it's nice and tall,” he said. “I felt like I got on the hitters pretty well. I feel like it's a pitcher's park rather than a hitter's park.”

Several Blue Jays - including the young core of Vladimir Guerrero, Jr., Bo Bichette, Cavan Biggio and Lourdes Gurriel, Jr., - previously played for the Bisons and have a feel for the 32-year-old ballpark in downtown Buffalo.

Measuring 325 feet to the poles and 404 feet to centre field, the dimensions are quite similar to Rogers Centre.

“Generally speaking, it's a completely normal, average-to-solid triple-A field,” said former Toronto pitcher Shawn Hill, who played for the Bisons in 2014. “It's fairly mundane in terms of the outfield. You don't have a lot of weird nooks and crannies or anything like that.

“It's fairly generic I would say, and not in a bad way.”

“It's a pretty decent park but it's not a big-league park,” Hill said. “You could make the argument in a roundabout way that the (Blue Jays) might have an advantage. They'll play there more often.

“They can get used to it and know what to expect and these teams coming from a big-league park into a triple-A park are going to have the bigger challenge.”

Like many pro athletes, baseball players can be creatures of habit. Sightlines, lighting irregularities, infield dirt quality, mound height and grass style can all take some getting used to depending on the athlete.

Hill, now a scout with the New York Yankees, said lighting quality will likely be the most important factor for players.

“All big-league parks you're under bright, bright lights and you can see everything,” said Hill. “You're talking about being able to see the spin on the ball more effectively. Being able to read the hitter's swing. That first step for an outfielder, those first couple feet off the bat, are they able to make the reaction the same way?

“Are they able to track it, turn and run, and then turn back and pick the ball up again? When the ball is glowing, it's much easier to do. Under dim light, it's a little bit harder to take your eye off the ball completely. So there's those different factors that you might see.”

Toronto's first four home games are scheduled to be played in the evening under the lights.

“I know some of the hitters were complaining about the (scoreboard) being right in centre field, in the batter's eye, it kind of messed with them,” Pearson recalled from his time with the Bisons. “It'll be interesting to see what they do about that, whether they leave it off or whatnot.”

The Blue Jays were able to work out in Toronto last month at summer training camp. The government approved the temporary setup of players training at Rogers Centre and isolating themselves at an attached hotel.

However, a proposal to play regular-season games there was kiboshed by Ottawa due to concern about players travelling in and out of the country from U.S. states ravaged by the COVID-19 pandemic.

The Blue Jays tried to make plans to share big-league facilities in Pittsburgh and Baltimore but were unsuccessful. The team eventually went with the familiar border city of Buffalo.

“It's kind of almost going backwards where the young Jays team would be the team that would probably be OK just throwing them into any old park and they'll adjust on the fly,” Hill said. “Because they probably aren't as fine-tuned and as habitual and routine-oriented in what they need and want and feel. Whereas you can get some of those salty veteran teams coming in and they're going to notice a difference.”