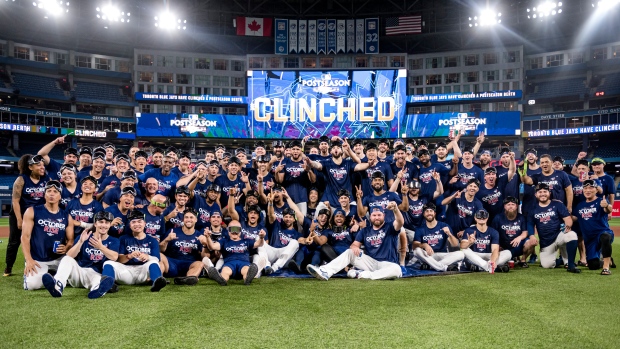 The Toronto Blue Jays' first foe in the playoffs is now official.

Toronto is slated to take on the Seattle Mariners in the American League wild-card round. The series will lead off Friday at Rogers Centre.

The Seattle Mariners defeated the Detroit Tigers 7-6 in 10 innings, and stamped their trip to Toronto when the Boston Red Sox tripped the Tampa Bay Rays 6-0 in a game called after five innings because of rain.

Having clinched the top spot in the wild card, the Blue Jays will have home-field advantage against one of the two teams they had been battling against late in the regular season for the edge.

It is just the second time in six seasons Toronto has made the playoffs. The team's last appearance in the post-season was in 2020 where it got swept in the wild-card round by the Tampa Bay Rays, who will enter these playoffs as the third wild-card seed.

The last time the Blue Jays made it to "October baseball" before then was in 2016 when the team made it to the AL Championship Series for the second consecutive season.

Toronto clinched a playoff spot Sept. 30 after the Baltimore Orioles dropped a 5-3 decision to the Boston Red Sox. The Blue Jays then took hold of the No. 1 wild card spot on Monday with a 5-1 win over the Orioles paired with Seattle's 4-3 loss to the Detroit Tigers.

Toronto is 2-5 in its season series against the Mariners. The two sides had matched up in two separate series' with the Blue Jays taking the first one 2-1 at home in May, then dropping all four in the second series at Seattle in July.

The team is heading into the post-season with a head of steam. After dropping two of its final three games against the New York Yankees last week, Toronto has now won four straight with two games remaining.

The Blue Jays close the season on the road with a doubleheader against the Baltimore Orioles on Wednesday.