A coroner has identified a body found underneath ice in a Markham pond on Saturday afternoon as that of missing Scarborough woman Taneesha Brown.

Officers found the body underneath the ice in a pond near Edward Jeffreys Avenue and Highway 48 on Saturday morning.

The pond is about 1.5 kilometres away from Bur Oak Secondary School, where Brown, 25, was last seen on Jan. 12.

The coroner told Brown's family of the positive identification on Saturday evening.

“I’m just relieved I have an answer, I’m filled with sadness and I just can’t believe that this happened,” Brown’s brother, Tristan Mazerolle, said.

Police also said that the clothing found on the body were “similar” to what Brown was reportedly wearing at the time of her disappearance.

Kevin Mazerolle said people all over the world shared information about his sister’s disappearance, and the family is grateful for their efforts.

“I just want to say thank you to everybody, not just in Canada but all over the world, who shared the post and any way you contributed. You guys mean a lot to us.”

Tristan said their mother, Kim, is holding as best as she can, but is very distraught by the news.

“I don’t think any parent should ever have to go through this with their child.”

Brown left her aunt’s house in the area of McCowan Road and Castlemore Avenue at around 10:30 p.m. on Jan. 12 after telling her family that she was going outside for some fresh air.

After leaving the residence, police believe Brown walked to Bur Oak Secondary School, where she briefly spoke with a man who had noticed that she wasn’t properly dressed for the winter weather and asked her if she was alright. Police say Brown told the man that she was “starting on a journey" and then proceeded to walk towards the school’s soccer field, not to be seen from again.

A total of 25 officers were participating in the search for Brown on Saturday in what was the fourth coordinated effort since her disappearance.

Previously, police had used remote-controlled water vehicles to search ponds near the school for Brown as well as a helicopter to conduct an aerial search.

The pond where the body was found hadn’t previously been searched, though, as it was outside of the initial perimeter.

“Our search teams were out focused on areas of high-hazard today and this is exactly that. It is a pond area, there are sloped hills and the ice may have been thin enough that the body went through and into the water,” Pattenden told CP24. “This was exactly the area that officers were tasked to be out searching and they did find a body.”

Brown had been previously diagnosed with schizophrenia and bipolar disorder and last week her father Uriel Brown told reporters that he had introduced her to the teachings of the Nation of Islam and feared she may not have been able to interpret the religion properly.

“The last time I saw her she was talking in a religious context - ‘repent, it’s the end of the world,’” he said.

Members of the Toronto Fire marine unit were called to the pond to help free the body from the ice. It was then taken to the coroner’s office for identification.

Police say it is too soon to speculate on how the body ended up underneath the ice.

“I don’t know. We have no suspect information here. All we are doing is following the leads we have,” Supt. Fred Moffatt told reporters at an afternoon news conference.

But in a posting on Facebook, Brown’s mother Kim wrote that “there is no speculation of foul play.”

“She seems to have been walking along the edge of the pond and fell in.” 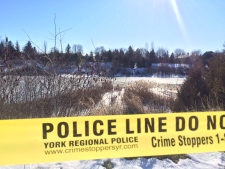 Police tape is shown at a Markham pond where a body was located on Saturday morning. Officers searching the area for a missing 25-year-old woman found the body under the ice. (Arda Zakarian/CP24) 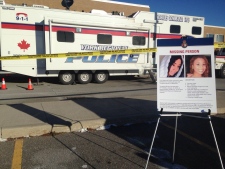