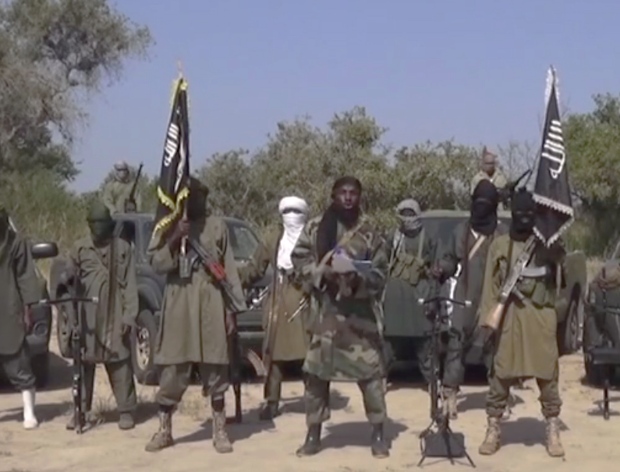 This Friday Oct. 31, 2014 image is taken from video by Nigeria's Boko Haram terrorist network in which their leader, center, denied agreeing to any cease-fire with the government and said more than 200 kidnapped schoolgirls all have converted to Islam and been married off. (AP Photo)

BAUCHI, Nigeria -- Boko Haram Islamic extremists have seized the headquarters of a multinational military force near Nigeria's border with Chad, just days after foreign troops abandoned the base, according to a community leader and residents who took to canoes to escape.

Following Saturday's action in Baga, Nigerian troops on Monday began evacuating their families from the nearby town of Monguno, creating a panic and causing civilians to flee, according to Hussain Monguno, an official of the Borno-Yobe People's Forum.

"The military has abdicated its responsibility to protect civilians," he charged. "People are panicking and fleeing Monguno now because of the military pulling out."

The developments raise fears that the way is now open for the insurgents to use Baga as a base to attack Maiduguri, the capital of Borno state and the biggest city in Nigeria's northeast. Monguno lies between the seized base at Baga and Maiduguri.

Scores of soldiers and civilians were killed in the attack on Baga, while others drowned in Lake Chad, Nigerians taking refuge in a Chadian village said in cellphone calls on Sunday night. They said insurgents fired rocket-propelled grenades and automatic assault rifles and hurled explosives.

"They came in their hundreds driving several Hilux patrol vehicles, trucks and some were on motorcycles and immediately began to throw explosives and bombs," fisherman Audu Labbo told The Associated Press.

He and others reached by phone said the troops fought until they ran out of ammunition Saturday. Details on the attack were slow getting out of the remote area.

Some soldiers removed their uniforms and threw away their rifles, Labbo said. Several military officers, politicians and a community leader said only Nigerian troops were at the base.

A senior military security officer in Maiduguri confirmed that the Baga base is under the control of the insurgents. He said troops fled because they received no reinforcements despite holding out for several hours. The officer spoke on condition of anonymity because he is not authorized to give information to reporters.

Monguno, the community leader, said he heard last week Wednesday that Boko Haram's top leaders were gathering outside Baga. "I informed authorities here and the U.S. Embassy," he told The Associated Press in a telephone interview. AP was trying to get comment from the U.S. Embassy.

Days before the attack, Cameroon, Niger and Chad withdrew their soldiers from Baga, he said, adding "it is still unclear why."

He said the extremists had been able to seize large amounts of military hardware abandoned at the Baga base.

Demoralized Nigerian soldiers have complained of being frequently outnumbered and outgunned by Boko Haram, that they are abandoned to fight in the bush without enough food or bullets, and that corrupt officers steal part of their pay.

Nigeria's ambassador to the United States has accused Washington of not doing enough to help an old ally in its battle against extremists. The United States has refused to sell Nigeria helicopter gunships because of laws prohibiting sales of some weaponry to countries whose militaries are accused of massive human rights abuses.

Human rights groups and AP reports have indicated the military has killed hundreds of civilians.

Boko Haram recently attacked villages and a military base in Cameroon.

Thousands of people have died and some 1.6 million have been driven from their homes in the five-year-old Islamic extremist uprising.