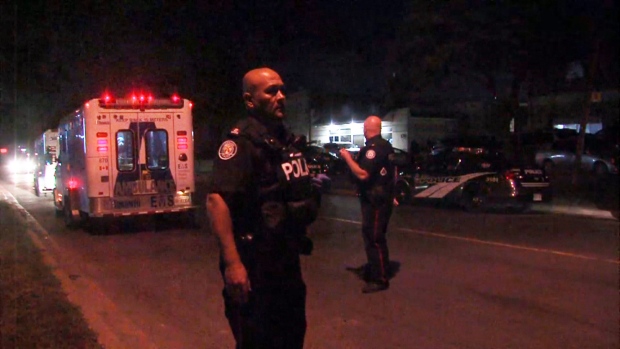 Police investigate a homicide in the area of Toryork Drive and Weston Road Sunday August 25, 2019.

A 17-year-old has been charged with murder in the shooting death of 46-year-old Alexis Charles outside a party in North York last summer.

The victim was found without vital signs near Toryork Drive and Weston Road, near Finch Avenue, shortly after 5 a.m.on Aug. 25

Police said they went to the scene after receiving a call about a male who had been shot.

First responders tried to revive Charles, but he was pronounced dead at the scene.

Investigators said at the time that there was a large party going on and at least 100 people were nearby when shots rang out.

On Wednesday, police said they arrested a 17-year-old boy.

He was charged with one count of second-degree murder.

He cannot be identified per the terms of the Youth Criminal Justice Act and appeared in court at 2201 Finch Avenue West on Thursday morning.

Police said Alexis Charles, 46, of Toronto, was shot and killed near Weston and Finch on Sunday morning. (Toronto Police)