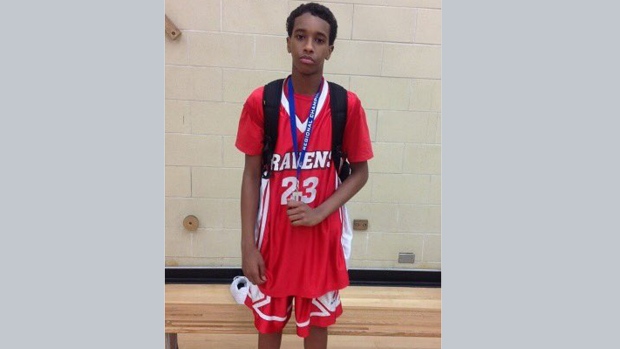 Sharmarke Farah, 17, was killed outside a shisha lounge in Mississauga on Feb. 7, 2016. (Police handout)

A 17-year-old boy is dead after a shooting outside a shisha lounge in Mississauga overnight.

The shooting happened near Airport and Derry roads at around 1 a.m.

Police have identified the victim as Sharmarke Farah of Toronto, but few other details have been released at this point.

“At this time we are still investigating,” Const. Bally Saini told CP24 at the scene on Sunday. “We have interviewed over 50 witnesses and once we gather all that we will try to get out more information.”

Saini told CP24 that police did arrest one person on scene for firearm-related charges; however that person is not suspected in Sharmake’s death.

The circumstances of the shooting, meanwhile, remain cloaked in mystery.

One witness at the scene told CP24 that he was inside the shisha lounge when he noticed some people pushing and shoving on a screen displaying surveillance camera footage from outside.

At that point, the man said he went outside and discovered the victim’s lifeless body.

“I just went next to him and called 911. There was blood all over him,” the man said.

Once police arrived, they secured the scene and detained dozens of patrons of the shisha lounge in a number of buses that were brought to the area.

The man who initially called 911 was one of those people who was detained and he told CP24 that it appears as though investigators thought the suspect could be among the masses.

“The police started yelling ‘Whoever has a weapon drop it down on the ground now,’” the man told CP24 at the scene. “The suspect I think is on the bus. That is what they are saying."

Police remain on scene; however the patrons of the shisha lounge have since been released after being held for upwards of four or five hours.

“They took us on the bus, they searched us. We were here all night and weren’t even allowed to use the washroom,” another man told CP24 at the scene.

Paramedics initially took the victim to hospital with life-threatening injuries; however he was pronounced dead upon arrival. 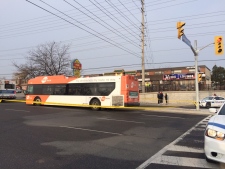 Police tape is shown at the scene of a shooting outside a shisha lounge in Mississauga on Sunday. (Arda Zakarian/CP24.com)

Police cruisers are shown at the scene of a fatal shooting in Mississauga on Sunday morning.