Boy remains in hospital after fall from Downsview highrise

A seven-year-old boy is currently in hospital after falling from a Downsview highrise Thursday evening.

It happened at a building on Wilson Avenue, just west of Keele Street, shortly before 7 p.m.

The child was at a birthday party and playing when he fell from a bedroom window on the eighth floor, police said.

“Fortunately, it appears that the ground was saturated (and) broke some of his fall,” Toronto police Sgt. Claudio Martelluzzi said at the scene.

“He did suffer some serious injuries, they are not life threatening. He’s currently undergoing medical treatment.”

The boy’s injuries include some broken bones, Martelluzzi said.

Several adults and other children were inside the apartment at the time the boy fell.

Officers continue to investigate at the scene. 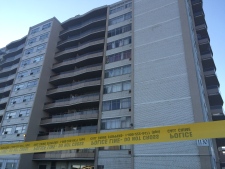 Police tape is seen around a building on Wilson Avenue after a child fell from an apartment on Thursday, July 2, 2015. (CP24/Jackie Crandles)