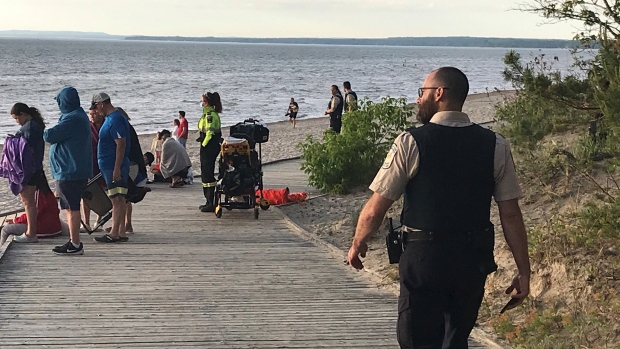 A 22-year-old man from Brampton has died following a drowning at Wasaga Beach on June 12, 2021 (David Sullivan/CTV News Barrie)

A 22-year-old Brampton man is dead after he was pulled from water off Wasaga Beach on Saturday night.

Huronia West OPP says that they were called to Wasaga Beach Area 2 at 5:30 p.m. after a man who had floated several hundred metres off shore on a “flotation toy” and could no longer be seen near it.

“Friends of the male called 911 and a collaborative search and rescue effort ensued. The search lasted approx. two hours,” the OPP said Sunday.

An OPP helicopter spotted the man’s body near where he was last seen and he was rushed to hospital for treatment.

He was pronounced dead in hospital.

His name was withheld pending notification of next of kin.

“The investigation is on-going but information suggests the deceased was a very weak swimmer and not wearing a personal flotation device,” the OPP said on Sunday.