Brampton man wanted in 2006 murder of wife arrested in Mexico 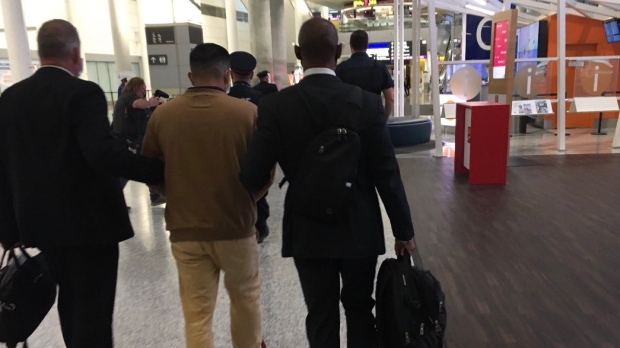 A Brampton man wanted in connection with the 2006 murder of his wife is now in custody after he was located in Mexico, Peel Regional Police say.

Malena Morales, a 31-year-old mother of two, was found murdered inside her family's apartment in the area of Steeles and McMurchy avenues in Brampton in the early morning hours of July 13, 2006.

A Canada-wide warrant was issued the following day for the arrest of the victim's husband, Henry Morales, who was 30 years old at the time of the homicide.

“This was a loving mom, a woman who was dedicated to her family, to her marriage, to her husband,” Insp. Thomas Warfield, who worked on the case over the years, told CTV News Toronto on Wednesday.

Investigators said that sometime after the murder, Morales fled from Canada to Mexico.

“From this investigation we knew he had fled the country and gone to Mexico. Those were records that we had already that were pertaining to his travels,” Warfield said. “It then goes cold.”

Warfield said he was assigned to the cold case years later after he transferred to the Peel Regional Police Service’s homicide unit.

“I worked with a team of investigators and we started to build a platform of how we could look for him. We used the RCMP, international police. We used law enforcement in El Salvador at one point. We then used the resources of America's Most Wanted,” he said.

“It is one of those cases that you get started with and you can't let it go. I left homicide and went back out to our uniform patrol as a patrol sergeant and it was still something I worked on even while I was out on the road.”

In 2019, 13 years after the murder, Morales was located in Mexico and it took another 10 months before he could be extradited back to Canada.

He was recently arrested with the assistance of Mexican authorities and local investigators travelled to Mexico to escort him back to Ontario, Peel police said on Wednesday.

This began with a tragic homicide. It was followed by an international manhunt lasting 14 years and was profiled on America’s Most Wanted. It ended today with @PeelPolice returning Henry Morales from Mexico to face justice. #policingexcellence https://t.co/cweZPliH8X pic.twitter.com/Xdtl6tLVaZ

“A tip came through our portal... from there led to ultimately the arrest and him being brought back to Canada,” Warfield added.

“I understand he was down there, he was involved in his community, and somehow the information started to float out.”

He said the arrest will help provide the victim’s family with some long-awaited closure.

“It sends a message to those that are out there: we are looking for you and we are not going to stop,” Warfield said.

Morales, who is now 44, has been charged with one count of second-degree murder and is currently in custody awaiting a bail hearing at the Ontario Court of Justice in Brampton.

Police say Henry Morales has now been arrested in Mexico in connection with the 2006 murder of his wife. (RCMP handout)