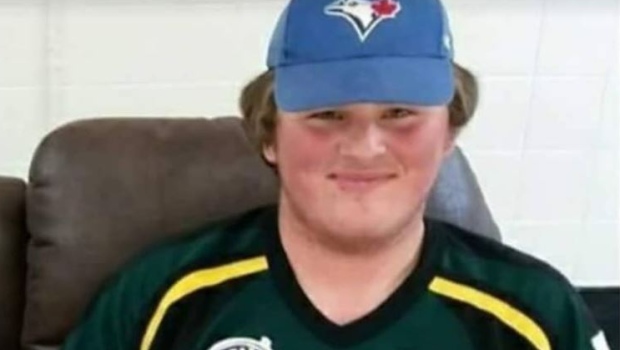 HUMBOLDT, Sask. --- Brody Hinz was such a sports fan that, in Grade 8, he made a special request to his principal -- so special, he wrote it down in a letter.

"Tomorrow is the NHL trade deadline ... no one will be able to concentrate in class."

Hinz, 18, was one of 16 people who died after the Humboldt Broncos junior hockey team bus and a semi-truck collided last week on the way to a playoff game in northeastern Saskatchewan.

Hinz was the volunteer stats collector for the team and, on Saturday, hundreds of people turned out to pay their final respects.

"Brody was a gift to Humboldt," Popoff told the service.

"Brody enjoyed watching Ron MacLean and Don Cherry on 'Coach's Corner.' Brody would have been fascinated by the love and outpouring of support for the Humboldt Broncos."

A two-sport Special Olympian -- bowling and floor hockey -- Hinz had Asperger's syndrome, a high-functioning form of autism. He had a knack for math and an exceptional memory.

He compiled statistics for his beloved Broncos, and the gig allowed him to travel with the team.

Popoff said students who knew him were always impressed with his sense of humour and hard work.

"Our students all say that Brody loved to talk. They say he could talk forever about absolutely anything and everything. He was always happy. He listened so well to every conversation."

Hinz played three years of high school football and his jersey was among the items on display at the front of St. Augustine Catholic Church.

There was also a drawing he did of a Toronto Blue Jays pitcher and a board with his favourite teams, including the Jays, the Winnipeg Jets, the San Francisco 49ers, the Saskatchewan Roughriders.

Many of the mourners wore green and gold hockey jerseys -- the colours of the Broncos. Three surviving members of the team were among those attending the service.

A single hockey stick was propped up in the corner at the entrance of the church.

"We're just here to support them," he said. "We'd always talk CFL football even though he was a 49ers fan. He was a Saskatchewan Roughrider fan at heart too."

Michelle Ackerman said Brody was great with the kids at the church.

"He definitely had a place in our church and in our hearts."