Brother and sister die after being struck by vehicle in Vaughan; teen driver faces upgraded charges

A four-year-old boy and his10-year-old sister have died in hospital after being struck by a car while in a Vaughan, Ont. driveway this weekend.

Emergency crews were called to Athabasca Drive, near Dufferin Street, around 12:00 p.m. on Sunday after a vehicle veered off the road and hit three people.

According to police, two children were playing in the driveway with a neighbour who had come over to help them fix their bike when they were struck by a black Mercedes.

Both children, who have not been identified, were rushed to hospital but later died of their injuries.

A man was also taken to hospital with non-life threatening injuries.

The 16-year-old driver of the Mercedes was taken into custody at the scene, police said, and was charged with dangerous driving causing bodily harm.

Since the death of the two children, his charges have been upgraded.

The teenager cannot be identified under the Youth Criminal Justice Act. The charges have not been proven in court.

CTV News Toronto obtained surveillance video from a neighbour that shows the car just seconds before the crash. 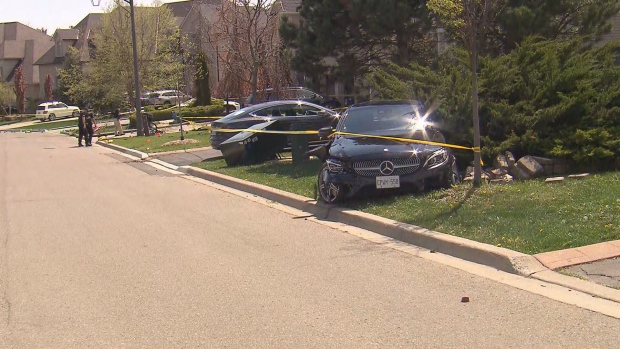 "On behalf of everyone at YRP I extend our deepest condolences to the family impacted by this tragedy in Vaughan. We were all hoping for better news. Our thoughts are with the family and the community," MacSween tweeted.

"Losing a child is a pain no parent should ever have to experience. Learning the 10-year-old girl struck during Sunday’s reckless driving incident has passed away is devastating news. Sending prayers & strength to the family. Two lives were taken too soon due to this senseless act," he tweeted Monday evening.

Meanwhile, a memorial has started to grow outside the home where the kids were struck. Bouquets of flowers and teddy bears could be seen on Monday evening. 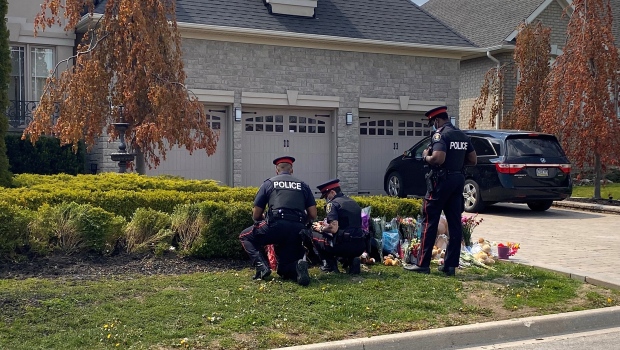 A number of police who were called to the home on Sunday following the crash added flowers to the memorial on Monday.

“I went home, I thought about it, I can’t imagine what they are going through,” York Regional Police Constable Sampson Sunmol told CTV News Toronto. “What we can do is come here and show our respect and also, you know, we’re here for them.”

Neighbour Elizabeth Lincoln described the young boy as a "delightful child" and said the family moved into the area in the middle of the COVID-19 pandemic.

“He was just a sweetheart.”

Investigators are asking anyone who has not yet spoken to the authorities to contact police or reach out to Crime Stoppers anonymously.

Losing a child is a pain no parent should ever have to experience. Learning the 10-year-old girl struck during Sunday’s reckless driving incident has passed away is devastating news. Sending prayers & strength to the family. Two lives were taken too soon due to this senseless act https://t.co/BWlNAF0VwI

York Regional Police officers are seen laying flowers at the scene of a crash in Vaughan, Ont. where two young siblings were killed. (Ken Enlow/CP24)

Flowers and a stuffed animal are left near the scene of crash that killed a 4-year-old boy on Athabasca Drive, near Dufferin Street in Vaughan. (Ken Enlow/CP24)