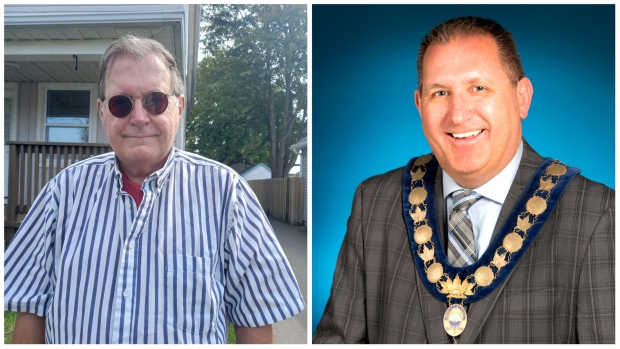 Charles Steele (left) and Bill Steele (right) are seen in these undated photographs. (Provided by Charles Steele and City of Port Colborne)

Two brothers who haven’t spoken to each other for about 30 years are now competing for the coveted position of mayor in an Ontario town.

Up until the day before registration for the Oct. 24 municipal elections closed, incumbent Bill Steele was running unopposed in Port Colborne.

And then his brother signed up for the race—meaning there will be two “Steeles” on the ballot when residents go to the polls.

“I believe in democracy,” Charles Steele told CTV News Toronto. “If I hadn't have run … my brother would have been acclaimed.”

“What's going to be the future? You're going to just start appointing people? That's not democracy.”

Charles said he hasn’t spoken to his brother in about 30 years, and did not discuss his intention to run against him beforehand, despite thinking about the decision for a few days prior to registration.

“I don’t think he’s happy about it,” Charles added.

Bill, who spent 17 years as a city councillor and was first elected mayor in 2018, says that while he was surprised to see his brother’s name on the list of certified candidates, he was always ready to fight for his seat.

“I mean, we were ready for a campaign,” he told CTV News Toronto. “No matter who the candidate is, or would be against us, then that's who we're going to battle it out.”

In the last municipal election, Bill beat out three other competitors, earning 702 more votes than the runner up.

In total, 6,636 residents cast their ballot in 2018, representing a voter turnout of just under 43 per cent.

Bill says he hopes to continue the work he wished to accomplish, but was put on the backburner due to the COVID-19 pandemic. This includes a focus on water sewer rates, bringing more doctors to the region, and expanding necessary infrastructure.

“I'm going to run on my record,” Bill said. “I don't sit on any fences. So I do take stance. Sometimes people agree with my stance, sometimes they don't.”

Charles doesn’t agree, and says his brother hasn’t done much during his time in office. He hopes to focus on affordable housing, cutting taxes and reducing the number of homeless people on the streets.

“It's not going to be easy. It's going to be very difficult but we should start saying what's impossible, we gotta make possible.”

Charles added his brother “treats the taxpayers of Port Colborne like a piggy bank.”

“I moved to Toronto when I was 18. I got a job with the post office. My brother, my father handed him the insurance business,” he said. “He doesn't know what it's like to live on a fixed income.”

Neither brother seems particularly worried about any further familial strains come election day. Bill, for his part, has said he doesn’t discuss his opponents on the campaign trail and that won’t change.

“We'll be happy when voting day comes and we lead the polls.”