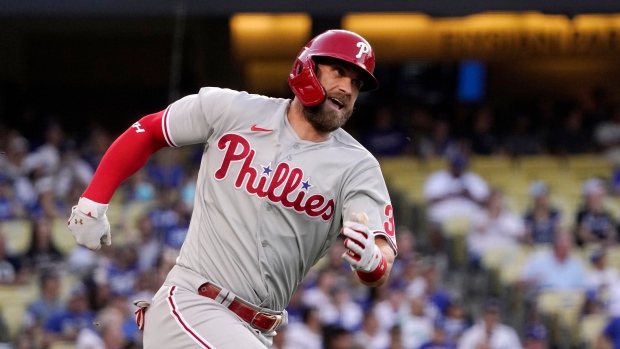 Philadelphia Phillies' Bryce Harper rounds first on his way to a double during the first inning of a baseball game against the Los Angeles Dodgers Saturday, May 14, 2022, in Los Angeles. (AP Photo/Mark J. Terrill)

PHILADELPHIA (AP) - Bryce Harper returned to the Phillies lineup as the designated hitter on Saturday after he missed the previous five games because of soreness from a platelet-rich plasma injection in his right elbow.

The reigning NL MVP hit third for the Phillies against the Los Angeles Dodgers and right-hander Mitch White.

The 29-year-old Harper is batting .305 with nine home runs, 14 doubles, 27 RBIs and a .634 slugging percentage. He has been playing exclusively at designated hitter since injuring his arm on a throw from right field last month. He last played the field at Miami on April 16.

“The last couple of days were tough for me,” Harper said before the game. “Woke up yesterday feeling good and today feeling better, as well.”

Harper had hoped to play in the three-game series this past week against San Diego. He had the shot Sunday because of a small tear in the ulnar collateral ligament of his throwing elbow and sat out the finale in Los Angeles against the Dodgers. He missed the entire Padres series and the opener Friday at home against the Dodgers.

“The plan is to always stay in there,” Harper said. “But if I feel it or I'm not all right, then I'll be out of the lineup.”

Harper has been unable to throw because of the injury. It could be another six weeks before he is cleared to try again and possibly resume his spot in right field.

Harper likely would have spent a chunk of the season on the injured list had the National League not adopted the DH this season. Manager Joe Girardi said there was a chance the Phillies might have carried him on the roster as a pinch hitter.

The Phillies had dropped four of five games entering Saturday.

“Ready to go,” Harper said. “Ready to get back in there and try to help.”

Harper did have a new souvenir in his locker - a hat he obtained in a trade with a Phillies fan for one of his own during a game this week against the Padres.