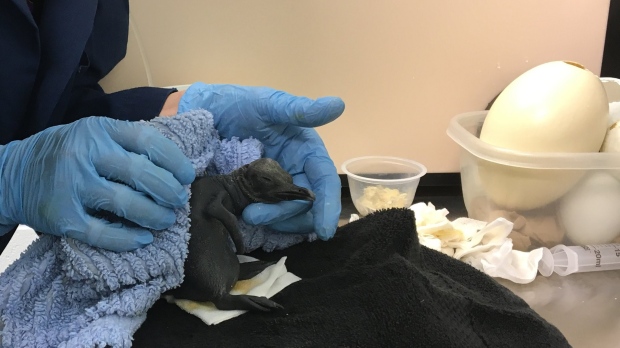 Zookeepers in Calgary have rescued an unhatched penguin chick after patching its badly-damaged shell with pieces of another egg. The recently-hatched king penguin chick is seen being tended to at the Calgary Zoo in a recent handout photo. THE CANADIAN PRESS/HO-Twitter, @Calgaryzoo

CALGARY - Zookeepers in Calgary have rescued an unhatched penguin chick after patching its badly damaged shell with pieces of another egg.

The Calgary Zoo says in a news release that animal care staff noticed fragments of the king penguin's shell inside the beach area of the birds' habitat over the August long weekend.

The chick wasn't expected to hatch for about another week, so the veterinary team patched the porous shell with a piece of shell from a Humboldt penguin egg from years before, and the egg was placed in an electronic egg incubator.

After a few rough days, the little chick tried to hatch by itself, piping through a small hole elsewhere in the egg.

Seeing progress was slow, the Calgary Zoo says its team gently helped break a little more of the shell and played king penguin noises to give it some encouragement.

The chick fully hatched on Wednesday, and is now being closely monitored.