Calling anti-Semite to testify at hate trial would have been disastrous, lawyer says 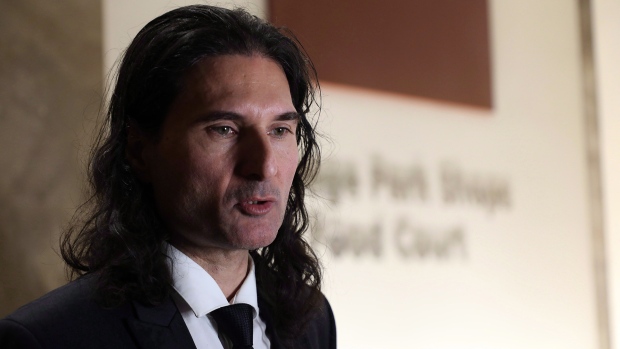 James Sears, editor in chief of "Your Ward News," is seen outside Ontario court in Toronto on Wednesday, Nov. 28, 2018. THE CANADIAN PRESS/Colin Perkel

TORONTO - Calling a notorious anti-Semite as a witness would have been disastrous to the defence of wilfully promoting hatred, the former lawyer for a convicted hate monger testified on Thursday.

Under cross-examination by his ex-client, Dean Embry said raising questions about the veracity of the Holocaust would have been worse than futile.

“No judge in Canada was ever going to find that the Holocaust didn't happen,” Embry said. “Denying the Holocaust in the context of this trial was crazy and suicidal.”

Embry's testimony came during an appeal by James Sears, editor of Your Ward News. Sears and publisher LeRoy St. Germaine were convicted last year of promoting hatred against Jews and women via their free Toronto-based publication.

Sears, 57, who is acting as his own appeal lawyer, is seeking to have his conviction overturned on the basis Embry was incompetent and botched the case.

Key among his complaints is that Embry refused to call any witnesses to counter two prosecution experts on anti-Semitism and misogyny. Sears insists experts would have been helpful in showing the articles were true - a defence to the hate charge.

“You were suggesting that we call an expert that specifically said Jewish people were cut off from reason,” Embry said. “It was just so clear to me so quickly the Crown's cross-examination of that expert would have been devastating to our case.”

Trying to defend the truth of articles in Your Ward News with their “aggressive” contention that women are inferior to men would also never have flown, Embry said.

“There's no truth to that. We can't call a defence that women shouldn't be allowed to vote.”

Bernie Farber, chairman of the Canadian Anti-Hate Network, said he hadn't “seen anything this absurd” in a Canadian courtroom since the trial of infamous Holocaust-denier Ernst Zundel in the late 1980s.

“Having to listen to the anti-Semitic conspiracy theories being discussed in this appeal turns my stomach,” Farber said.

Sears has maintained the articles were satire, but Embry said he had difficulty with that notion.

“You were never able to explain to me how it was satire,” he said in the hearing, which offers a glimpse into discussions normally shielded by solicitor-client privilege.

“We just don't see eye to eye on what satire is,” Sears responded.

Embry testified their interactions were mostly pleasant. He said they often discussed Sears's various views and his proposed “harebrained” questions and defence strategy.

“This case is one of the most collaborative cases I've had with a client,” Embry said. “It wasn't me telling you, `Listen, it's my way or the highway'.”

The lawyer called Sears an attention seeker hoping for “some ill-conceived shot” at fame. His client even indicated he wouldn't mind being convicted on the misogyny charge because he thought he could take on some a tour, court heard

“You said there was an upside to being convicted,” Embry reminded Sears.

The only hope for acquittal rested on convincing Ontario court Judge Richard Blouin that paper's “very offensive material” didn't amount to violence-inciting hate, Embry said. He wanted to win and did what he could to raise that doubt, he said, albeit unsuccessfully.

Court also heard the trial prosecutor wanted to use Sears's criminal convictions for sexual assault in the 1990s as evidence of prior discreditable conduct. Sears, who was later pardoned, had been publicly promoting the fiction he had appealed successfully, court heard.

Sears wanted it to stay that way, Embry said. As a result, the lawyer said he refused to demand the prosecution file a police report, which would have turned up no criminal record given the pardon.

He said he didn't want to draw attention to the issue in line with Sears's wishes but also didn't want to argue the criminal conduct hadn't happened: “I couldn't allow him to mislead the court and couldn't assist him in doing so.”