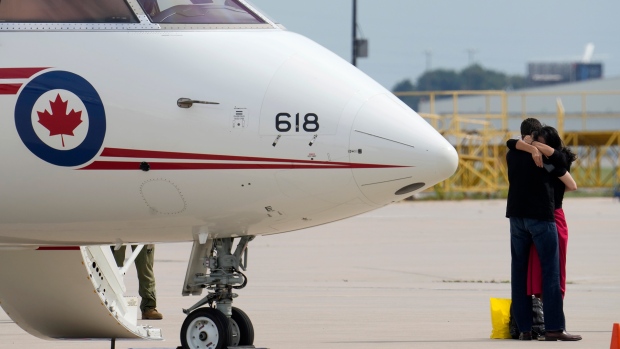 OTTAWA -- Canada owes no debts to its allies, including the United States, for their help in standing up to China and bringing the Meng Wanzhou-two Michaels affair to a close, says Prime Minister Justin Trudeau.

Canada and the U.S. resolved the nearly three-year standoff with China by holding firm to their shared belief in the “rules-based” international order, and that united approach will be key to confronting the challenges posed by China in the future, Trudeau said in a year-end interview with the Ottawa bureau of The Canadian Press.

Two imprisoned Canadians, Michael Kovrig and Michael Spavor, were released in September after more than 1,000 days in Chinese prisons after American authorities abandoned their prosecution of Meng, a top Huawei executive that Canada arrested on an American extradition warrant in December 2018.

Kovrig and Spavor's imprisonments were widely seen as retaliation for Canada's arrest of Meng so the Americans could force her to stand trial for allegedly violating trade sanctions with Iran.The long saga came to end when the U.S. withdrew its extradition request for Meng and entered into a deferred prosecution agreement.

David Cohen, the newly arrived U.S. ambassador to Canada, suggested in testimony before the Senate foreign relations committee last month that the Biden administration was growing impatient and was eager to see Ottawa adopt a China policy that was aligned with Washington's tough stand.

Trudeau brushed off a suggestion that Canada is somehow beholden to the Americans on its new China policy.

“One of the nice things about standing up for one's values and defending the rule of law and not making backroom deals and not bowing to pressure is when you're just standing up for your values and for the way this is supposed to work, you don't end up owing anything,” the prime minister said in the interview.

“You, of course, continue to work with your partners and appreciate the support and alignment that is there. But we were able to do this by fulfilling the principles and the values (that) Canadians hold dear and that's extremely important in this issue.”

In his U.S. Senate confirmation in November, Cohen called China an “existential threat” to the U.S. and said he would be involved in discussions to “make sure that Canada's policies reflect its words in terms of its treatment with China.”

Trudeau didn't appear to be out of step with that thinking during the interview, but he also made clear that he is on no one's schedule but his own.

Trudeau gave no indication that his government's long-awaited decision on whether to ban Chinese high-tech firm Huawei from Canada's next generation 5G internet is coming anytime soon. Canada is currently the last of the Five Eyes intelligence sharing members to decide the key international security issue. The alliance includes the U.S., which views Huawei as a security threat, as well as Britain, Australia and New Zealand.

The Canadian government delayed its decision on Huawei because it didn't want Kovrig and Spavor to face consequences in prison. Two months ago, Trudeau said a decision on 5G was weeks away, but it looks certain 2022 will be arriving with the issue unresolved.

“We've had many conversations over the years around security of our telco networks and telcos are looking at the way the world is going,” he added, “and quite frankly, the way China has been behaving on the world stage, not least of which is the arbitrary detention of the two Michaels.”

Hours before the interview, Trudeau released the mandate letters for his new cabinet ministers, and while the word China was noticeably absent from Foreign Affairs Minister Melanie Joly's letter, the country was squarely addressed.

Without offering a timeline, Trudeau told Joly to “develop and launch a comprehensive Indo-Pacific strategy to deepen diplomatic, economic and defence partnerships and international assistance in the region.”

The “Indo-Pacific” label is widely viewed in foreign policy circles as shorthand that is meant to exclude China in discussions about the vast geopolitical entity on the other side of Canada's Pacific Ocean border.

“You will work to promote peace and security, combat authoritarianism and counter foreign interference through collective international responses, including by expanding our cooperation with likeminded partners and Canadian, international and multilateral organizations,” said Joly's mandate letter.

Trudeau came to power in 2015 hoping to deepen economic and political relations with China, but the effort faltered in 2017 when the two countries were unable to reach agreement on launching free trade talks. Relations plunged to an all-time low in late 2018 with the arrests of Meng and the two Michaels and have remained in a diplomatic deep freeze since.

As 2021 winds down, Trudeau said Canada remains committed to working in tandem with allies to confront China.

“The experience we had of the arbitrary detention of the two Michaels has been a very vivid illustration of China's modern approach to global diplomacy. And I think we are extremely aware both of that challenge but also of what has worked against that challenge, which is first and foremost, staying true to our values and to the rule of law,” the prime minister said.

Trudeau noted that countries around the world regularly raised the plight of the “two Canadians arbitrarily detained in China, much to the displeasure of their Chinese interlocutors in all ranges of bilateral meetings.

“That concerted alignment between like-minded countries, and a firmness around the rules-based order and the rule of law is what we're going to have to continue to put at the center of how we approach not just China, but all sorts of international challenges.”