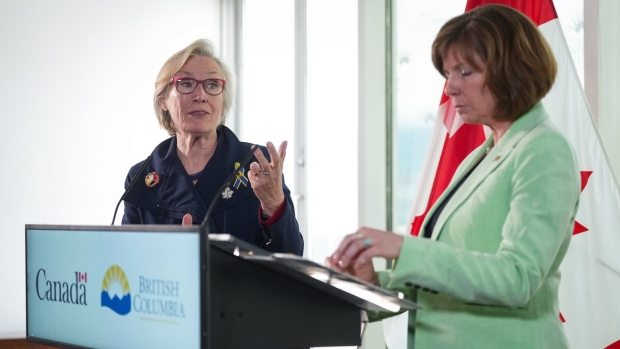 Drug users in British Columbia who possess up to 2.5 grams of illicit drugs for personal use will not be arrested or charged starting next year as the province serves as a potential model for similar changes elsewhere in the country.

The three-year exemption from federal drug laws effective Jan. 31 is the first in Canada.

It will apply to those 18 and over and include opioids like heroin and fentanyl, as well as cocaine, methamphetamine and MDMA, also known as ecstasy. Those drugs will no longer be seized by police.

Carolyn Bennett, the federal minister of mental health and addictions, said granting the exemption request is a significant policy change and the first step in much-needed bold action to slow the overdose crisis that has killed nearly 10,000 people in B.C. alone since the province declared a public health emergency in 2016.

“This is not legalization. We have not taken this decision lightly," she said Tuesday in Vancouver.

"And with it comes great responsibility for the health, safety and well-being of the people of British Columbia and is a template for other jurisdictions across Canada."

However, Bennett said she "will not be voting" Wednesday for a private member's bill introduced by New Democrat MP Gord Johns to decriminalize possession of small amounts of drugs across the country. She said the bill lacks "guardrails" around implementation.

"It has been an important bill, but I think that starting with British Columbia is a prudent way to go," Bennett said.

Johns, who represents a riding on Vancouver Island, stood in the House of Commons Tuesday and called on Prime Minister Justin Trudeau to end an "irresponsible" patchwork approach involving the national overdose crisis.

"There are thousands of families burying their loved ones outside of B.C. Provincial and local governments shouldn't have to fill the void of federal leadership. Lives are at stake," he said, asking if the government would support his bill.

Trudeau did not directly answer the question, saying the government is "working with partners to advance a multi-faceted health-based strategy to end the overdose and toxic drug supply crisis."

"That is why we have approved the B.C. proposal to decriminalize personal possession of small amount of certain illegal drugs within the province. There is, of course, more to do and we are taking action with a range of provinces and territories as well as other partners to end this ongoing tragedy," he said.

Alberta Premier Jason Kenney said Tuesday in Edmonton that he worries about the decision being a "slippery slope," and wonders why other provinces weren't consulted about the plan.

“I don’t think it’s hard to see where this is going. And where it’s going, I believe, is in a counterproductive direction.”

The threshold of illegal substances allowed falls short of the 4.5 grams requested by B.C., and that was already deemed too low by some drug-user groups that have criticized the province for failing to adequately consult them.

"The evidence that we have across the country as well as (from) law enforcement and here in British Columbia as well as the RCMP is that 85 per cent of the drugs that have been confiscated are under two grams," Bennett said of the federal government's justification for the threshold.

However, Garth Mullins, a member of the Vancouver Area Network of Drug Users, which was among the organizations consulted by the B.C. government, said 4.5 grams for a three-day supply was an acceptable threshold based on extensive research the group had done.

Entrenched drug users "hold" multiple drugs and could consume 2.5 grams "for breakfast" so the exemption may not end up decriminalizing them, Mullins said.

"What people are buying as 'down' right now often contains, almost always contains, fentanyl to some greater or lesser degree. Fentanyl really rocks your world, but it goes by quick. It's out of your system fast, so if you have a drug habit, you've got to use more frequently."

B.C. will become the first jurisdiction in North America to lift prohibitions on possession of small amounts of so-called hard drugs. In 2020, Oregon decriminalized such possession, but the drugs were still subject to seizure, and those in possession faced a US$100 fine.

The province submitted an application to the federal government last November asking for the exemption as part of a public health approach to the overdose.

Bennett's B.C. counterpart, Sheila Malcolmson, said the approval was sought because shame and fear have kept people from accessing the care they need, while the concern of being criminalized has led many people to hide their addiction and use drugs alone.

"And using alone can mean dying alone, particularly in this climate of tragically increased illicit drug toxicity," she said.

B.C. provincial health officer Dr. Bonnie Henry said the exemption is a vital step to keeping people alive and helping them connect to the health and social supports they need.

"By removing the fear and shame of drug use, we will be able to remove barriers that prevent people from accessing harm reduction services and treatment programs," Henry said in a statement.

This report by The Canadian Press was first published May 31, 2022.