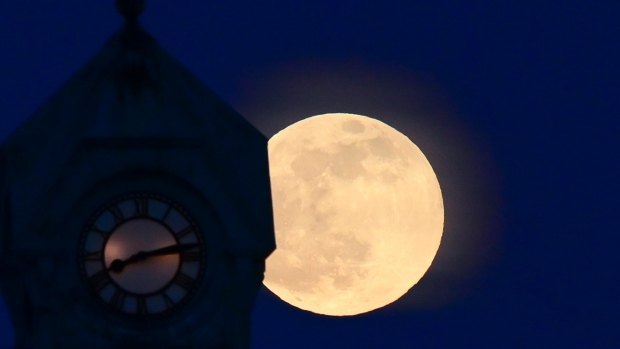 The Super Pink Full Moon rises over the former Almonte post office, which is a National Historic Site of Canada, in Mississippi Mill, Ont., on Monday, April 26, 2021. THE CANADIAN PRESS/Sean Kilpatrick

OTTAWA - Science Minister Francois-Philippe Champagne says Canada plans to land a rover on the moon in the next five years.

The Canadian Space Agency says the unmanned robotic vehicle will aim to gather imagery and measurements on the moon's cratered surface, showcasing technologies from Canadian companies in a polar region of the earth's only natural satellite.

Conducted in partnership with NASA, the mission hopes to have the rover make it through an entire lunar night, which lasts about two weeks and presents major technological challenges due to the extreme cold and dark.

Lisa Campbell, president of the space agency, says it will put out a request for proposals on design and development from two companies in the coming months.

Canadian astronaut David Saint-Jacques, decked out in his flight suit, was also present at the virtual announcement Wednesday, and will be among the candidates for the one Canadian spot on a four-person mission to travel around the moon in the next few years.

The announcement happened to come the same day the moon drifted through the earth's shadow in the first total lunar eclipse since January 2019.

In December the government signed an agreement with the United States to send a Canadian astronaut around the moon as part of a broader effort to establish a new space station above the lunar surface.

This report by The Canadian Press was first published May 26, 2021.