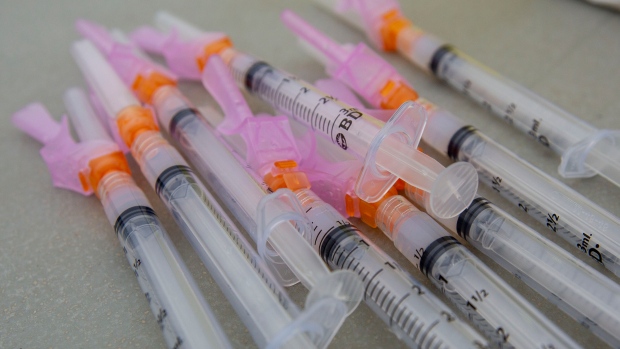 Several Moderna vaccine syringes lay on a table during a COVID-19 vaccine drive-thru clinic at Richardson Stadium in Kingston, Ont., on Friday, May 28, 2021. THE CANADIAN PRESS/Lars Hagberg

OTTAWA - Canada must decide what to do with millions of unused COVID-19 vaccine doses now that officials have confirmed they won't be needed to vaccinate children.

Roughly 6.6 million doses have been distributed to the provinces but not yet used, and there are an extra 13 million in Canada's central vaccine inventory.

Dr. Theresa Tam, the chief public health officer, says provincial and federal governments are working to figure out how many doses will be needed in Canada so that everyone can be fully vaccinated, and get a booster if they need one.

At the same time, they are keeping tabs on when doses expire to make sure they do not go to waste.

“Vaccines are a valuable commodity and extremely important to Canada, but also the world,” Tam said at a briefing Friday.

Canada has already announced it would donate more than 40 million doses to COVAX, a global vaccine-sharing alliance, to be distributed to countries in need.

Those donations focused on the Johnson & Johnson and Oxford-AstraZeneca vaccines. Though both are approved by Health Canada, Canada's domestic vaccine strategy focuses on administering mRNA vaccines from Pfizer-BioNTech and Moderna.

With 2.9 million pediatric doses of the Pfizer-BioNTech vaccine set to be delivered to Canada for kids aged five to 11, it's likely Canada won't use all of its mRNA vaccines before they expire.

Initial agreements between Canada and the mRNA manufacturers didn't allow for those doses to be donated, but that has been worked out, Tam said.

“There are ways that we can donate this vaccine now,” Tam said.

Arrangements have been made between the government, the vaccine manufacturers and COVAX, the global vaccine sharing initiative, to donate doses that can't be used or stored.

Health Canada is also looking at the possibility of extending the shelf life of some vaccines based on new data from the manufacturers, so they can be kept in storage for a few extra months.

“As we know more about the vaccines, and also as manufacturers make changes to their formulations, we get more information about how stable these vaccines are, how long they can be held on the shelf,” said Dr. Supriya Sharma, chief medical adviser at Health Canada.

Moderna has already made a submission to extend the shelf life of existing vaccines in Canada from seven months to 10 months, for example.

Sharma said any changes to the shelf life of vaccine products would have to be approved by Health Canada and supported by data on the safety and efficacy of the longer expiry.