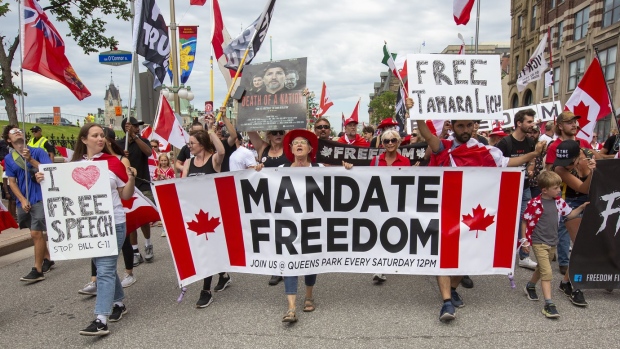 OTTAWA - The protests staged in Ottawa over the weekend that caused only minimal disruptions were a far cry from the “Freedom Convoy” demonstrations that occupied downtown streets for three weeks earlier this year.

While the initial protests saw vehicles blockading streets, the installation of a speaker's platform and a hot tub on Wellington Street in front of Parliament Hill, last weekend's protests saw measures like security screenings to visit the Hill and making the area off-limits to vehicles.

A few hundred people marched through downtown to voice their opposition to the federal government and public health restrictions, compared to the thousands that flowed in on weekends during the winter.

Howard Ramos, chair of the department of sociology at Western University, said the context of last weekend's protest was different, whereas during the winter there was a “perfect storm of amplification,” including Conservative MPs, people on social media and mainstream media coverage.

Ramos said the Ottawa Police Service and parliamentary security have learned from the winter demonstrations, as evidenced by the fact that vehicles were not able to get as close to Parliament as they did in the past.

He said it's also important to note that many of the mandates from the winter have since been relaxed or removed, making it harder to get the “broad range of coalition” that happened in the winter.

Somerset Ward Coun. Catherine McKenney said in an interview that this past weekend was unique in that it was Canada Day, so the city was not just expecting the protesters but also knew there would be thousands of people enjoying the holiday.

“So the threat of any type of clash concerned me greatly, concerned my colleagues greatly,” said McKenney, who uses the pronouns they and them.

Bylaw officers issuing tickets was critical to maintaining order as well, McKenney said, given that people are not allowed to set up tents, speakers or structures without a permit.

“Bylaw's response around those aspects was critical to ensuring that we didn't have midnight concerts on Wellington Street, we didn't have stages set out, we didn't have, even, tables set up where there's that focal point for congregating,” McKenney said.

The feedback from residents has been overall positive, but the significant amount of armed police did surprise people a bit, they said. “We're just not used to it.”

A balance must be struck between community safety and over-policing, said McKenney, contrasting February when they were “begging” police to come into residential neighbourhoods that were “essentially lawless,” and as the movement around the convoy starts to dissipate somewhat.

Asked what Ottawa police thought they did differently this time, the service in a statement pointed to interim police chief Steve Bell's speaking notes from June 27.

Police had been gathering intelligence, speaking with organizers and observing open source online commentary, he said, adding the service has taken “an enhanced and extended posture” that started well before Canada Day and extended “well past” to ensure it properly protected the city.

“The robust police planning, deployment and response met the challenges presented by this major event and protests,” a police spokesperson said, adding no estimates of the policing costs for the weekend are available yet.

The City of Ottawa worked closely with Ottawa police and other policing partners in the implementation of a public safety plan, which included traffic management and enforcement of all applicable city bylaws, said Kim Ayotte, the city's general manager of emergency and protective services, in a statement.

The city also communicated with residents through various channels leading up to and during the Canada Day weekend, Ayotte said.

The response was reminiscent of the handling of the “Rolling Thunder” protest in late April, when Ottawa police called in more than 800 reinforcements from RCMP and other forces to help, including by blocking off highway exits and streets in the downtown core to prevent an encampment forming.

That event cost an estimated $2.5 to $3 million to police.