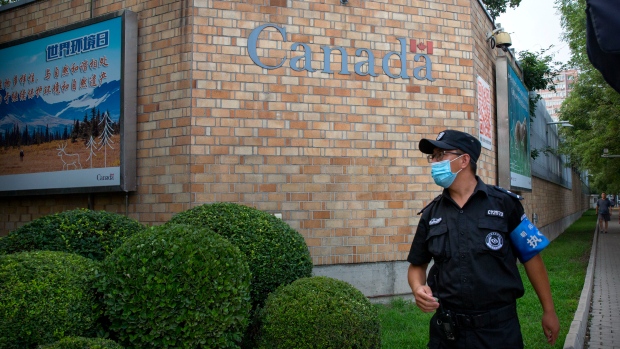 A security officer wearing a face mask to protect against the coronavirus stands outside the Canadian Embassy in Beijing, Thursday, Aug. 6, 2020. (AP Photo/Mark Schiefelbein)

OTTAWA - Canada is telling China that it strongly opposes the death penalty after a second Canadian was sentenced to death on drug charges by a Chinese court this week, Deputy Prime Minister Chrystia Freeland said Friday.

Ye Jianhui was sentenced Friday by the Foshan Municipal Intermediate Court in the southern province of Guangdong after being found guilty of manufacturing and transporting illegal drugs. Death sentences are automatically referred to China's highest court for review.

This came one day after Canadian Xu Weihong was also sentenced to death on drug charges by a different court in the same province.

Canada has long opposed the death penalty and Canadian officials will continue making this clear to China, Freeland said in response to the sentences.

“We believe it is a cruel and inhumane punishment and we make that clear to all of our interlocutors everywhere,” she said in Toronto.

“We have made that clear in our conversations with China and we will continue to do so.”

She did not, however, link these two cases to the ongoing diplomatic tensions between Canada and China over the arrest of Huawei executive Meng Wanzhou.

She has previously described China's detention of Canadians Michael Kovrig, a former diplomat, and Michael Spavor, a businessman, as apparent retaliation for the arrest.

Meng's arrest in 2018, which was done at the request of the United States under an extradition treaty, infuriated Beijing, seeing her case as a political move designed to prevent China's rise as a global technology power.

“I think that they could be linked. We don't know that they are linked, but the threat of retaliation was made and we haven't seen any other actions from the government of China except (the two death sentences).”

He warned Canada to stop this “interfering” if they wish to avoid further damage to China-Canada relations.

Global Affairs Canada had been closely following Ye's case and was able to provide consular assistance to him and his family, department spokesman John Babcock said Friday.

Canadian officials also attended the verdict and sentencing of Ye on Friday and have called for clemency for him and all Canadian citizens who have been sentenced to death.

McCuaig-Johnston says it is positive, and often unusual, to see China allow consular access to Canadians in these cases.

But despite the fact the death penalty is not an uncommon punishment for large-scale drug cases, she notes the Chinese legal system is not a fair one for those who find themselves accused of a crime, even without the existence of diplomatic tensions.

“Their opportunity for self-defence is next to nil in China, so you have to consider that not all of these cases are necessarily a focus of guilt and perhaps, as happened with Robert Schellenberg, the individuals even if they were guilty, might have been given a shorter sentence, not execution.”

Schellenberg, another Canadian convicted on drug charges, had a previous sentence upgraded to the death penalty following a sudden retrial of his case held shortly after Meng's arrest.

A Canadian citizen identified as Fan Wei was given the death penalty in April 2019 for his role in a multinational drug smuggling case.