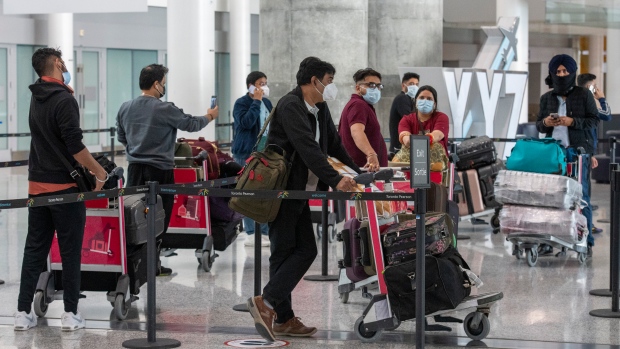 Passengers from Air India flight 187 from New Delhi wait for their transportation to quarantine after arriving at Pearson Airport in Toronto on Wednesday, April 21, 2021.THE CANADIAN PRESS/Frank Gunn

The federal government is looking into flights arriving from India due to a massive surge of COVID-19 cases ravaging that country, Canada's top public health doctor said Wednesday as at least one province urged Ottawa to tighten the border.

“We will be doing further analysis because it's an emerging situation, not just because of the variant of interest at this point but because they have unfortunately a very massive resurgence in that country,” she said. “We will be doing that risk assessment again, and using the data that we have now collected at the border to inform our next steps.”

A case involving the “variant of interest” that originated in India -- known as the B. 1.617 variant -- was detected in Quebec on Wednesday, west of the provincial capital.

But rather than banning travel from nations where variants have emerged, Tam said Canada has mostly opted to take a broader approach, instituting “layers of protection” against travellers from all countries.

She pointed to a pre-boarding test for COVID-19, tests on arrival and government-mandated quarantine.

Calls are mounting for Ottawa to limit travel from India and other such hot spots.

Hospitals in India are now overflowing, and medical oxygen is in low supply. The effort to test and vaccinate residents is floundering, and bodies are piling up at morgues and crematoriums.

But even so, Indian Prime Minister Narendra Modi is urging states to avoid lockdowns by creating micro-containment zones to control outbreaks instead.

According to the Canadian government, there have been 35 flights from India with at least one case of COVID-19 that have arrived in Canada in the last two weeks.

Ontario's government, for one, is “pleading” with Ottawa to ban travel from India.

The provincial government says cases of COVID-19 are pouring in through international borders.

“I am pleading with the prime minister to secure our borders so that we can get control of these international variants,” he said.

Canada has limited travel from some countries over the course of the pandemic.

In late December, the government barred flights arriving from the U.K. in a bid to prevent a contagious variant of COVID-19 that first emerged there from entering this country.

The ban lasted until early January, and ultimately, the B.1.1.7 variant took hold in Canada.

As of Tuesday, the federal government was reporting 67,417 cases of COVID-19 involving that variant.