Canada 'got it right' about Iraq's WMD's in leadup to war, new paper suggests 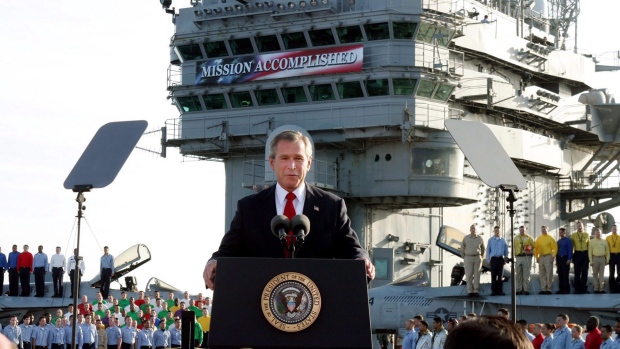 President Bush declares the end of major combat in Iraq as he speaks aboard the aircraft carrier USS Abraham Lincoln off the California coast, in this May 1, 2003 file photo. It's perhaps fitting that a member of the Bush family has achieved in a few days something that seemed unattainable for years: getting Republicans to declare that the 2003 invasion of Iraq was, after all, a big mistake. THE CANADIAN PRESS/AP,-J. Scott Applewhite

OTTAWA -- A new research paper says Canadian intelligence assessments on Iraq were generally accurate in the run-up to the U.S.-led invasion of 2003 - unlike reports produced in Washington and London that were used to justify war.

Almost nothing has been said outside government circles about Canadian judgments that Saddam Hussein had no active weapons of mass destruction program, the paper says - partly to avoid embarrassing American and British counterparts.

“Canada's intelligence assessments on Iraq in 2002 and 2003 subsequently turned out to be largely correct, while the analysis of most other countries on key Iraq issues - as far as is publicly known - was flawed,” concludes the paper, recently published in the journal Intelligence and National Security.

“The most notable difference in the Canadian case was the lack of any significant political or other outside pressure on assessment organizations to slant the Iraq analysis in a particular direction.”

“Getting it Right: Canadian Intelligence Assessments on Iraq, 2002-2003” was researched and written by Alan Barnes, a senior fellow at the Centre for Security, Intelligence and Defence Studies at Carleton University's Norman Paterson School of International Affairs.

He is far from a neutral party on the topic, having been closely involved with the production of the Canadian assessments on Iraq during this period. He was lead drafter of 21 analyses by the Privy Council Office's Intelligence Assessment Secretariat (IAS) and, as director of the secretariat's Middle East and Africa Division, supervised the production of 20 others.

Barnes also drew on documents released by key federal agencies over the years - though much classified material remains under wraps - as well as interviews with 11 managers and analysts from the intelligence community who were involved in the assessments.

He found that Canada's assessments of U.S. policy on Iraq, Baghdad's weapons capabilities, the regional implications of an invasion and the subsequent internal instability of Iraq proved to be generally on the mark.

The paper also points to evidence the information was included in briefings given to then-prime minister Jean Chretien, whose Liberal government decided not to participate in the Iraq War.

It concluded any remaining chemical agents or ballistic missiles from prior to the 1991 Gulf War could only exist in very small quantities, and would likely no longer be useful because of poor storage conditions, Barnes writes.

The question of whether Baghdad was rebuilding its WMD capabilities since the departure of United Nations inspectors in 1998 got to the heart of the U.S. administration's claims that Iraq was a growing threat to the world, the paper says.

Canadian analysts “could see no convincing indications that Iraq was reconstituting its nuclear program. They did not have confidence in the soundness of the evidence being cited by the U.S. as proof of Iraqi nuclear activity.”

Nor could the analysts detect signs that Baghdad had restarted production of chemical weapons or was preparing to do so.

The extensive sharing of intelligence meant that analysts in the Five Eyes alliance - the U.S., Britain, Canada, Australia and New Zealand - were largely working with the same body of information in trying to make sense of things.

Analysts in Ottawa were well aware of the disagreements taking place in the other Five Eyes countries over Iraq's purported WMDs, as well as the pressure put on analysts in those countries by senior officials to come up with specific conclusions to support the policy line, Barnes says.

He detected a fairly consistent pattern:

- In their one-on-one interactions with their Canadian counterparts, allied analysts often expressed reservations about the evidence and avoided firm judgments;

- The classified written intelligence products that Canada received from allies would express firmer, but still qualified, conclusions while acknowledging the limits of the information;

- Finally, the public position of allied governments - in statements by senior officials or documents released to the public - would express unconditional conclusions on the basis of what was claimed to be conclusive evidence.

“The knowledge that many allied analysts shared similar reservations about the quality of the information on Iraq's WMDs gave Canadian analysts and managers greater confidence that they were on the right track,” the paper says.

Even so, there were differing views.

“This is likely a reflection of the discomfort of CSIS managers and analysts at being out of step with the U.S. intelligence community on a critical issue which might compromise their close operational links.”

“However, by then it had been shared with the U.S., giving Washington the impression that the Canadian intelligence community concurred with the U.S. claims when this was not the case.”

In contrast, National Defence analysts had extensive knowledge of these issues, gleaned from participation in the earlier UN inspections in Iraq and “intimate familiarity with the available intelligence over the previous decade.”

In early March 2003, Defence published “Iraq: No Smoke, No Gun,” which deemed it unlikely that WMDs would be found.

Indeed, only a small number of abandoned chemical munitions from prior to 1991 were ultimately discovered in Iraq.

The IAS assessments were a significant element of verbal briefings on Iraq given to Chretien by Claude Laverdure, the foreign and defence policy adviser to the prime minister, the paper says.

Chretien, skeptical of the U.S. rationale, took the position that Canada would support military action against Iraq if it were sanctioned by the UN Security Council.

In his memoirs, Chretien says he told then-U.S. President George W. Bush in September 2002: “I have to tell you, I've been reading all my briefings about the weapons of mass destruction and I'm not convinced. I think the evidence is very shaky.”

Laverdure said to Barnes he remembers tough discussions in various meetings with Bush and then-British prime minister Tony Blair, as well as with other senior U.S. and U.K. officials, who demanded to know why the Canadians refused to accept the conclusions in the American and British reports.

During one meeting, Laverdure recalled, Blair “was mad, mad, mad and Chretien became irritated ... Blair kept saying to Jean Chretien, 'Can't you see it, we get the same reports,' and Chretien replied, 'No, I don't see it.”'

In normal circumstances, almost all Canadian intelligence assessments dealing with foreign and defence matters are shared, in whole or in part, with the Five Eyes allies, Barnes writes.

“This did not happen with IAS assessments on Iraq, which were classified 'Canadian Eyes Only' in order to avoid uncomfortable disagreements with the U.S. intelligence community which would exacerbate the sensitivities affecting relations at the political level.”

Barnes says that when Robert Wright became Canada's security and intelligence co-ordinator in April 2003 he asked to see all of the IAS reporting on Iraq's WMDs.

Wright would later make it clear “that there was to be no 'triumphalism' for having made more accurate assessments.”

Barnes notes the only public acknowledgment of the Canadian record was an op-ed piece by Paul Heinbecker, Canada's ambassador to the UN during the Iraq crisis, which discussed U.S. intelligence and included a cryptic comment: “The Canadian analysis was better.”